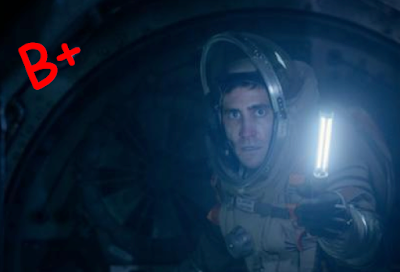 There have been a good number of life-on-mars flicks, most of them doomed to an eternity in the bargain bin box at retail stores. And with Ridley Scott's Alien leading the way in the genre of alien-vs-man survival (and so few successes to look back on besides his all the while) that we have to ask: Is there any practical way to make a compelling alien movie involving the red planet? Daniel Espinosa (Safe House, 2012) restores some lost confidence that the answer is indeed yes.

A team of research scientists aboard an international space station have come upon a rapidly evolving life form. Cutely, it is named "Calvin" by a little girl on earth as the world watches. But this Calvin is like nothing on earth; it is not cute or adorable. It is an awesome little survivor like no one and no thing on the planet. If I were creating a character sheet for Calvin in a Bubble Gum Crisis campaign, I'd give him an adaptability score somewhere beyond monstrous. And Calvin is indeed a monster. I put him up there with Ridley Scott's hellish creatures for very close to an even fight. And as we are led to believe, this Calvin and his awful race of beings caused the extinction on Mars. Now, it threatens the crew of the space station and even all life on Earth.

"Miranda North" (Rebecca Ferguson) is head of security for the vessel, but after "Rory Adams'" (Ryan Reynolds) encounter with the beast, it becomes clear that their quarantine protocols will need some rethinking. She and "David Jordan" (Jake Gyllenhaal) find themselves surprisingly outmatched as this survival-bent thing traverses the ship in efforts to obtain the upper hand. And Calvin isn't stupid. He picks his battles.

LIFE is alive with the right balance of well-developed characters and even an established ship culture. By the time the specimen containing Calvin is examined and the first proto-appendages are found, we already have a vested interest in the lives of those on the ship. Performances all throughout are respectable. Calvin's predatory nature isn't just apparent; it is something more worthy of a straight-out horror than a scifi. We can tell because we go home thinking about it after the movie is over. Suspense-wise, we aren't ever left waiting around for something to happen, or wondering why we should care.

So LIFE completely earns our respect in terms of its direction and the impression it makes on us. It isn't until the end that we are presented with a rather cheap sleight-of-hand that we can see coming. It may not redefine the genre, but the movie does earn its stripes by standing out in a category where so many cannot.