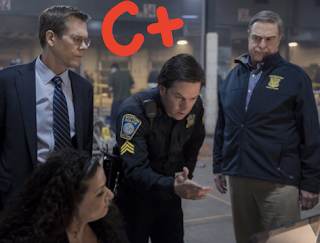 Patriots Day -- did anyone by chance notice "patriot's" should have an apostrophe?

Well, if you ask me, it doesn't matter. The movie, starring Mark Walhberg, Kevin Bacon, and John Goodman, brings us another made-for-TV movie. It is a dramatized version of the real-life event of the Boston Marathon Bombings of April 15, 2013.

The movie's star is "Tommy Saunders" (Walhberg) who is a fictional add-in as a cop in the doghouse for an indiscretion committed in the department. But he is about to get out of the doghouse, we learn, after he injures his knee on a street assignment if he will but endure just one more day by helping out the department keep order in the marathon. His day shapes up to be more than he could see coming (but not that we could not see coming). 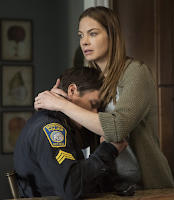 Patriots Day gives us what you assume it will give you going in: More of Walhberg's beloved homegrown Boston boy as he's appeared in countless movies before. His big costars - none of them any better or worse than he - are around to suck up the drama and up the tension, which the movie provides enough of. Goodman plays Commissioner Ed Davis. Kevin Bacon plays Special Agent Richard DesLauriers, and J.K Simmons plays Sergeant Jeffrey Pugliese, one of the more nuanced of the onscreen personality constructs.

What is brought before us has substance because it is based off of a real-life tragedy, but that tragedy had to be fictionalized to win our interest outside of a strict documentary context. It starts with sweet local store charm as the characters are introduced. And some rather weak romances are rekindled at the start, all to convey that feeling of: “it was just another day when this happened." It all doesn't take that long to develop, thankfully.

As for tension, the movie delivers, but it also relishes too long in the spirit of its accomplishments. The narrative is intense, and in its own right, attractive, but it still stands firmly planted in the land of The Made-for-TV Movie. And it will never move out.