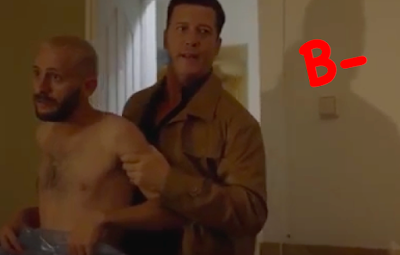 Judged strictly on type, Hotel of the Damned is exactly the sort of direct-to-DVD film that critics (and most audience members) really love to poke fun at. It’s a slasher flick with cover art that looks no more appealing than the movie is expected to be—and in fact, it is even less so, along with the trailer, which doesn’t really sell the film.

With perpetually dim lighting that gives you a headache trying to decipher details in shot after shot, there is something to be said for Bobby Baracioru’s Hotel of the Damned.

Barbacioru, who until now just stayed behind the scenes in works like Seed of Chucky, comes out wanting to get in on the slasher genre. His work here combines it with a “The Hills Have Eyes”-type of horror movie with a backwoods element to it, but he doesn’t stop there; he throws in some mobster characters for added cruelty.

The movie starts with a woman running away from someone in terror. She becomes fender-fodder. The accident (involving our main characters) sends the car off the road. The only option then is for each of them to pick themselves up from the wreckage and limp to a nearby run-down hotel that, despite appearances, turns out not to be so abandoned. 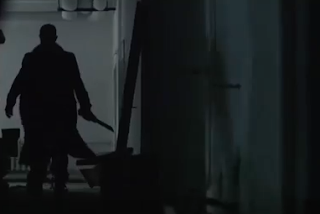 So we’ve already established that lighting isn’t one of its best qualities, but what can we say of the film itself? It is less than compelling, but it is the characters I found myself rooting for, despite all the film’s other setbacks (this includes the tendency of these backwoods cannibals to cackle maniacally and inexplicably in every chase scene).

When the film opens, we meet “Nicky” (Louis Mandylor). He’s a mobster and just got out of prison. He is being picked up by “Jimmy” (Peter “The Frighteners” Dobson), one of his running buddies. And the family drama doesn’t begin and end with business; it extends to Nicky’s actual family. He tracks down his daughter (Roxana Luca) and her loser, substance-abusing boyfriend (Bogdan Marhodin).

The acting overall, like the dialog, is heads and shoulders above what we expect to get in a direct-to-DVD release. It just is. And here, while the slasher scenes are not as drawn-out as they could have been, they aren't bad. And we get to see hats flying off in fight scenes…how many much bigger-budget movies take the time to include that little detail?

Nicky and Jimmy are delicious (read: iconically complex and mean). We like them more than we otherwise would for this reason. This project is lackluster, for sure, and it never becomes scary at any point, nor is it clear just how or why this hotel is a “hotel of the damned,” but how much did you really expect going in?