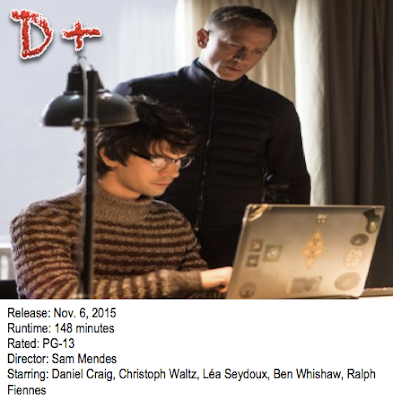 Spectre is the worst Bond movie to date. While SkyFall deserved to be called out for its own share of shortcomings, this next endeavor (the 24th) outdoes it by a long damn way.

Spectre is boring – almost profoundly so – and takes a rather gradual nosedive into a non-engaging quest for clues in the movie’s second half.

Our dear 007 (Daniel Craig, as you’ve never seem him before, bringing us a frustratingly poor performance that critics will be speaking of for generations) is attempting to make sense of clues that involve a mysteriously villainous organization known only as "Spectre." His pursuit of the mission stems from details involving "M" (Judi Dench’s) death, referring back to the events of Skyfall.

Bond’s quest has him once again involved with “Q” (Ben Whishaw), “M” (Ralph Fiennes), and “Moneypenny” (Naomie Harris) in a corruption investigation that has the whole MI6 in jeopardy. Bond crosses paths with an assumed-dead, mysteriously evil fellow named “Franz Oberhauser” (Christoph Waltz) who is not only not a respectably distinct and worthy Bond villain, but a senselessly undefined character who seems to have no basis in logic or rational thought for his motivations to control the flow of power worldwide. Oberhauser is even worse than Quantum of Solace’s “Dominic Greene.” Despite Waltz’ charismatic charm and role versatility, he can’t save this messy first-draft conception of a bad guy.

Bond’s love interest this time is looker Léa Seydoux's “Madeleine Swan” who, despite being a looker one can see being paired up with the likes of Bond, can’t keep things believable. Her character complexity is there, but since it is so obvious in nearly every shot the two are in together that their energy is not even close to a match, it doesn’t work.

And if the bad writing weren’t evident enough from the abovementioned components, they become so in a Spectre business meeting that Bond crashes where an even more over-the top bad guy “Mr. Hinx” (Dave Bautista) manhandles and gouges the eyes out of a fellow assassin just to prove to Oberhauser that he’s the right man for the job of killing Bond. This is a mightily inefficient and wasteful use of manpower, even for a secretive organization that, well, kind of needs assassins!

Director Sam Mendes could have made things work. The film began with an alluring and provocative violence-fest involving an exploding building, a street chase, and a fight in an out-of-control helicopter. It is so well done that viewers are made to want more. It is only after the credits that things go south. Not being elaborated upon in this review are the recurrent plot-holes—some of them so big that they would threaten to ruin the movie all by themselves.

Very few solid action sequences are spread throughout this benign film, with its frustrated star player who desperately wants out of his contract (yes, Craig’s loathing of this project is that evident). By the time the finale decides to roll in and the movie closes out, we are relieved that it’s over. Who knows the future of the Bond series from here? No one. But whatever happens, it won’t involve Daniel Craig…thankfully.