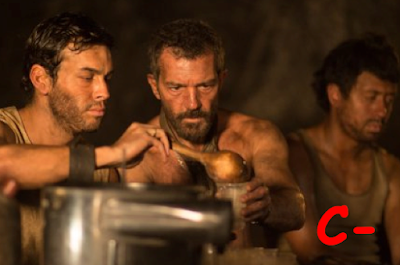 The 33 is about the 2010 Copiapó Mining Disaster. In it, we have a highly sensationalized take on the 69-day confinement of 33 Chilean miners who were buried more than 700 meters below the surface in 94-degree temps with very little food and water. An in-depth documentary would have done the whole ordeal more justice, but we got a movie instead.

Already hot and oppressively restrictive, the San José mine forced 33 men – some of whom were not at all fond of each other – to work together to survive. On top of being trapped with limited resources, they had no way to contact anyone on the surface. Meanwhile, up on the surface, the Chilean government jumped into action with help from neighboring countries and even NASA. The highly publicized rescue as it comes to us in the film involves, not just angry and grieving family members of those trapped, but personality conflicts that are supposed to serve as plot-points on which to make for a compelling movie. No go.

Director Patricia Riggen brings us a movie that is loaded with characters that deliver the goods on their acting more often than they don’t, but not a one of them (including Antonio Banderas who was more than anxious to play his part as group leader of the miner’s, “Super Mario” – Mario Sepúlveda) can feel right for their roles. We go in not having a good enough grasp of the characters from the start, but hearing heavy Spanish accents but English speech doesn’t sell us on the authenticity of the story, especially since the film flip-flops in Spanish and English. It doesn’t feel authentic.

When emotionally hot points are presented to show climaxes of desperation underground, they don’t have the intended effect. The film does touch on the political motivations on the how and the why on the Chilean government getting other nations involved to look good in keeping looking for the presumed-dead minors even when all hope seemed to be lost. And the movie does offer at least one or two emotionally effective shifts (just none that truly override the unrelate-able rest). It never makes much of an opportunity to address the worthy outrage of the miners’ never being compensated for what they went through.

There are problems with the casting: Gabriel Byrne (The Usual Suspects, In Treatment), as “Andre Sougarret” is the lead engineer responsible for the rescue. He is very effective. Contrast him with Bob Gunton (The Shawshank Redemption), as “President Piñera,” the Chilean president, who doesn’t feel right at all in his role. The rest of the characters are little more than stand-ins, clichés (to-be fathers, a bold leader, a misfit, a newb miner who was at the wrong place at the wrong time, etc.). Lou Diamond Philips as “Don Lucho” has an all-but-insignificant part. He could – and should – have run with a much larger role.

Riggen’s incredible mastery of lighting contrasts and ability to develop "run-for-your-life" tension as the mine begins to collapse—now those were positives! The bottom line is, we need more here and we don’t get it. A straight-up documentary where the actual participants tell their stories with a recounting of the mechanics behind the shifting would have been much more effective.