Pixels starts out in the year 1982. “Sam Brenner” (Adam Sandler) is a champion arcade player, but he’s only the second greatest in the world. His better is “Eddie Plant” (Peter Dinklage), a to-be felon who walks away with the gold. Video of the championship is launched into outerspace, and 32 years later, when Brenner is still aching from not taking first place, he is lying low as a cable guy squandering his talent. His only boost of self-esteem is that his old arcade pal, “William Cooper” (Kevin James), somehow became president of the free world and hooks him up with cool jobs sometimes.

When aliens choose to attack earth in the form of 3D versions of the old 1980s arcade games, Brenner and Cooper enlist an old, whacked-out mutual friend named “Ludlow” (Josh Gad) who got wise to the attack in the first place. Later, Eddie is released from prison and brought into the loop and the military prepped for attack with the help of “Violet van Patten” (Michelle "Gone Baby Gone" Monaghan).

Now no one with any brains would dream of taking the film seriously, but Pixels does not deserve all of the hate it has taken by the majority of reviewers. In fact, it is a delightfully silly time at the movies—and one with Adam Sandler in it that does not suck, which is saying something!

As far as the plot goes, there are enough twists to keep us interested, even though nothing story-wise really matters. Dinklage’s charm is un-get-over-able and his arrogance commendable. Since excitement levels stay high, all we need is Monaghan to take up the slack. And she totally does so! 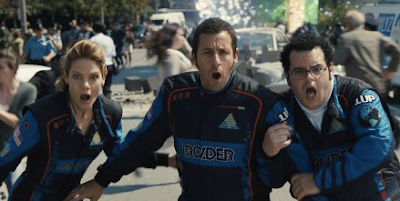 Chris Columbus (I Love You, Beth Cooper) has a firm grip on his vision for the film all the way through. The way the “pixelized” attacks go down doesn’t do anything for anyone except to allow Gad and James to just be themselves and let comic relief pull us through. The result: A movie that critics LOVE to hate!

Despite the age of the gaming material featured, you can strongly argue that the movie is still geared toward younger viewers, but certainly not overwhelmingly so. The film doesn’t forget older viewers since nostalgia-appeal was the real seller here. And honestly, it is difficult to nail down any one audience for Pixels since its admirers will vary by type.