Despite all of the atrocious adulterations and meat-headed melodrama of the 2009 Star Trek movie, director J.J. Abrams (Star Trek, Super 8) is back at it with Star Trek Into Darkness, a second movie that takes the finely recreated crew members and puts them into something more credible.

The last film had Kirk driving a 300-year-old classic car when he shouldn’t have even known how to drive or been able to get gas for it. It had more exploding planets and it had Kirk sleeping with hot alien chicks with Winona Rider cast as Spock’s mother. This time around, the continuing sophomoric trend stops with Kirk just sleeping with hot aliens. I’ll put up with that much. 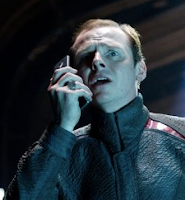 Now I could spend more time pointing out the former film’s absurdities or I could just tell you that in this movie, there are less of those and we get a near-total reboot of Khan with Spock and Khan going fist-a-cuffs. That alone is worth the price of the ticket, but lest I be accused of prattling on about just the things I liked, here is the synopsis.

After a mission on another world, the Enterprise heads back to earth where Kirk is censured for a decision made involving contact with a primitive species. When a rogue element brings mass destruction and a loss of life to the Federation, Kirk is called upon to lead a manhunt to bring the perpetrator back home. But being that he must venture to the edge of the neutral zone at a time of war with the Klingons, the stakes of survival are low, as are the odds of capturing a ruthless and dangerous man who is as ambitious as he is capable of eliminating all who get in his way.

Into Darkness is a good description of not only what the Star Trek series has always been about, but of the darkness within. The prerogative with the new movies has been the personal growth of its characters and their struggles in dealing with each other while having to make judgment calls and weigh choices. These choices center on the value of human life, the meaning of love and friendship, and more subtle elements than the old shows and movies cared to delve into. The oldies were more grandiose in conception, focusing on our outlook and what we would someday become, as well as the problems we would face. Both represent expanded thinking, albeit on different scales.

Love it or hate it, the new introspective take shows us how even our entertainment evolves as we do. This time around, I was delighted to find more reflections to the original Star Trek series and previous movies (with costume designs and patterns, sounds, etc.) more so matching the original, but I was also forced to accept that this is the future of Star Trek. This sort of “Dawson’s Trek,” young-adult-targeting is just what Star Trek has become. Maybe it had to for its influence to survive? And that may not be as bad as some (I) once thought. At the conclusion of it, I was okay dealing with a more emotionally conflicted Spock than Leonard Nimoy’s.

While the drama is tuned up (sometimes too much), the over-the-top storylines are thankfully tuned down. And while a few points of the plot raise some questions afterward, they don’t detract from anything during the viewing. And since the plot doesn’t exacerbate common sense or our expectations in one unlikelihood after another, we can focus on what is accomplished. It must also be considered a plus how the film has a lot more respect for things like distances in space travel, arranging travel logistics, and tech specs in general. The special effects are (no surprise) dazzling. But not everything is a step up.

The interpersonal drama sometimes fails. We aren’t ready to cry at the drop of a hat or be moved at each of the junctures where we’re supposed to be. Nearly every character offers up what we expect of them. Chris Pine’s Kirk and Zachary Quinto’s Spock, with Saldana’s Uhura, do exactly what we need them to do, but Benedict Cumberbatch’s Khan takes some getting used to, although his voice is a lot more memorable than his immediate presence. And then there is the fact that a total revamping of The Wrath of Khan that purposely messes with our heads in terms of re-arranged events – as if emphasizing the infinitely variable components of life and destiny – can’t help but take from the original Khan legacy just a little.

Throughout it all, Abrams doesn’t quite deliver the gravity of the Star Treks of yesteryear, but the boosted excitement mostly makes up for that. These new Star Treks are not prequels or sequels. They are all-out remakes. As such, they can be expected to let us down and lift us up in a spattering of ways. The conclusion of the matter is this: Star Trek Into Darkness is a superbly paced, inventive, funny, and hyper-exciting ride of thrills that is sure to entertain. If our expectations must be re-adjusted to fully appreciate it, then so be it.