How Many More Damn Aliens Will Crash-land on Earth? 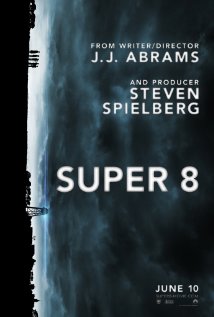 Going in, I had no idea what Super 8 was or what it purported to be about. This led to my mind wandering aimlessly to the popular motel chain in want of not being able to associate the film with any prearranged expectations.

Had I not been reviewing the movie, I can see now that my time would have been better spent shacked up in a Super 8 motel room playing Chickenfoot with a bunch of old people than sitting through this deformity of a film (a mistake I shall not make twice.)

Super 8 is brought to you by director J.J. Abrams, the guy who gave us the Alias TV series with Jennifer Garner. The film is produced by Steven Spielberg, but Spielberg can’t take credit for this one, nor should he want to. It is set in 1979 and is about four pre-teen friends who get together at a closed train station at night in a small town in Ohio to make an independent film where they see a truck run head-on into a train and derail it.

From that point onward, strange things start to happen in the town of 12,000 known as Lillian. The plot is underpinned by a tragedy in one of the boys’ lives. Young “Joel Lamb” (Joel Courtney) recently lost his mother. His friends “Cary” (Ryan Lee), “Preston” (Zach Mills), and “Charles” (Riley Griffiths) band together to make a movie about a zombie apocalypse to pass the time. They bring “Alice” (Elle Fanning) on board to star in their movie and she becomes a part of their crew.

Their movie is interrupted when the train derails in a news-making catastrophe. The shocked kids are warned by a bloody “Dr. Woodward” (Lynn Turman) who caused the crash not to ever speak of what happened or their families would be killed. The kids flee the scene.

Strange things start to happen in the community. Lights go on and off, electrical appliances start disappearing, and people turn up missing and dead. In a story that has no clear vision of what it wants to accomplish, this teen sci-fi/action/romance/adventure goes the way of Aliens, Cloverfield, E.T., and The Goonies. Though appreciably old school, this film is as much a trainwreck as the one that sets its plot in motion.

As scary as it is intense, Super 8 puts up a smokescreen of quality, which it gets mainly from the good acting of its new-but-impression-making child stars, and nearly everyone here puts on great, impassioned performances. This – and the amazing scenery with relatable, mood-tweaking special affects – would be the only pluses, as we are subjected to brazen emotional manipulation.

Young Joel and his deputy sheriff father, “Jackson” (Kyle Chandler) have taken a hard hit from the loss of their mother/wife. This has caused a rift in the family between Alice’s father (Ron Eldard) and Jackson who blames him for the death of his wife. With everyone so sad and devastated from grief, what better way to mend family ties than to…cope with an alien tragedy???

That’s what this ridiculous film does; it combines a grief-drama with a sci-fi alien attack similar to the way it was done in Signs (2001). If I want to watch a movie about aliens, I’ll do so – and the same goes for drama – but why in the fuck would I want to combine the two?

And it gets worse. In the midst of losing their community and homes to the military battling an apparently hellish alien, the writers figured, why not give the audience even more than the normal teens bantering back and forth before repeat waves of alien attacks—why not give them romance? That’s right. Instead of being literally scared shitless by an alien that would make me crap my pants, Charles and Joel both like Alice.

Uh, remember? There’s a goddamn alien out there! And it eats sheriffs and the military for breakfast!

How can you mix the un-relatable elements of family drama, teen romance, and grief with sci-fi doom? You can’t, unless you’re an idiot. Focusing on these elements cancels each other out. Still, this is emotional manipulation at its best because we get more shots of adults and kids crying-on-queue – complete with facial stills of red, watery eyes – than we do get to see the creature.

The entire movie is built on “ah ha!” moments following little traces of story expansion. The story takes off slowly. Then we are strung along for a while longer, with badly uneven pacing, before another “ah ha!” moment of E.T. terror-action. It’s a loud, smashing, crashing film, repeatedly followed with teens huddling and chattering while trying to save the day. Yes, it’s built for teen audiences, and they won’t catch the emotional manipulation, but will consider this a truly great film. Sad day.

We would care enough about our young, hero characters to root for them, but not enough to be put through the ill-timed back and forth reversions to family drama—alien action, then teens plotting, more alien action, then more teens plotting, like we are put through here. The kids, our stars, have it going on, but they are made to talk over each other in efforts to create real-sounding, combative dialog that is driven to overkill before half of the movie is up.

It is not until the end that we realize we’ve been sold a bad bill of goods when we are treated to a mellow-dramatic conclusion that will hammer home the movie’s many, many inconsistencies in a preachy conclusion we didn’t ask or care for…and that without any recognizable climax.


And now, for the numerous and hilariously badly constructed logistics of the plot...

1) The truck driven by Dr. Woodward derails a speeding, oncoming train, which he smashes face-first into. This tiny truck, a 60s-model pickup, would have been practically disintegrated on impact. It couldn’t have derailed a massive locomotive like this train that weighed many, many, many times more than it. Add to that, the professor inside isn’t even mortally wounded. He’s just bleeding and the truck appears only moderately damaged.

2) The train traveling through this small Ohio town is like any other train. Why would a train containing the radioactive building blocks for an alien craft and the alien itself be transported this way? Were there no military caravans available to ensure a secured, accident-free transport?

3) When Joel and Alice are watching the film reel of his deceased mother, the film is spliced together so that ONE reel shows his entire childhood, from his toddler years, to his more recent preteen years. How would he have done that with just one reel? These events were years apart.

4) A concerned citizen alerts Deputy Lamb to the fact that the military is using open ham radio frequencies to send sensitive information. Ham radios are phenomenally popular. Does the military not have secured channels of their own?

5) The alien creature is supposed to be amazingly advanced: “more advanced than humans can ever know.” If that is the case, how does this creature NOT know how to avoid a crash-landing? How many more alien movies will bring aliens to earth in the plot device of an emergency landing?

In the movie, the crash happens in 1957 rather than the alleged Roswell event in 1947. Guess the film felt it was being more original by moving the date ahead 10 years. Vain effort.

6) How does this “advanced” alien creature NOT know that he doesn’t need to kill sheriffs and innocent boys at gas stations? They had nothing to do with his captivity. He’s only seeking to rebuild his ship and get home, right? Why all the mayhem in a peaceful community? We’re supposed to root for the creature, or are we?

7) The “advanced” alien is shown consuming humans for food, but the creature is empathic and communicates by touch. Wouldn’t it feel the terror of consuming a living being? Does a species this advanced still consume living beings? It’s completely inconsistent.

8) How does this “advanced” creature maintain its physical stature? Evolutionarily, we lose what we don’t use. How is it a 30-foot-tall, hulking beast when it needs the precision to create relatively small spaceships from what looks like toy-ish, colorless Rubik’s cubes? The creature has no digits for such inventions.

9) How does this “advanced” and “subterranean” creature weld and put up makeshift lights in tunnels and caves? Does it not have eyes that see in the dark? Why create a lighted environment underground like some human basement dweller?

10) When the alien builds his spaceship out of the town’s metals being magnetically pulled to the water tower, you can see that guns, jewelry, and metal items are pulled to the mass of metal. This wouldn’t be a problem if soldiers with their guns were not picked up and sucked to it while signs, belt buckles, and obviously loose metals were not affected at all.

These are only the major problems. Many others could be mentioned. The credits at the end show the hysterical conclusion to the finished kids’ zombie apocalypse movie and it is much better than the movie itself.