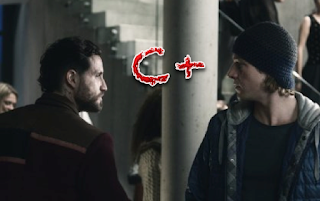 Kathryn Bigelow’s cult-classic Point Break was way ahead of its time when it hit screens in 1991. But the film industry being what it is, it had to be remade like everything else today. The plot of the new film by Ericson Core (“Invincible”) comes together organically enough, but Luke Bracey and Edgar Ramirez (the stars this time around) may just be causing Patrick Swayze to roll over in his grave!


The first film offered loads of humor, stark personality contrasts, suspense, and action; the first two attributes were what made the first movie an A+ while the lack of all the rest, save only the latter one, are what earn this one a barely passable C+. There is some fancy-schmancy choreography. You can’t take that away from it. The visuals are nothing short of incredible, although scenes of peril run long and the angles of the shots get awfully playful from time to time.

For those with lower viewing standards in search of a Christmas movie excursion, the film may work. The original movie had surfers looking to live on the edge. Their thing was bank robberies, as they viewed themselves like modern Robin Hoods who were fighting the system. The bad guys here are going after recompensing Mother Earth for mankind’s neglect of the natural order, and achieving nirvana from “living on the edge.” But they seem all over the map since their motivations aren’t confined to one strictly principled motif.

To explain the backstory to the audience, the plot unloads onto viewers the semi-interesting tale about a deceased guru named “Ozaki 8,” a fictional character. It stops just short of losing audiences. The flick starts with a motorbike riding expedition that has “Johnny Utah” (Luke Bracey, “The Best of Me”) losing a riding buddy in an accident he blames himself for. Feeling guilty, his life takes a bizarre turn and he winds up 7 years later going into the FBI. We see him in front of “Director Hall” (Delroy Lindo, “The One”) who doubts he is worth his salt as an agent.

In a dire effort to prove that he belongs in the Bureau, a determined Utah begins pursuing a theory about thrill-seeking thieves who want to commune with nature. His colleagues laugh, but as his suspicions seem to be panning out, he gets assigned to the case. Hot on the trail of the bad guys, Utah attempts to surf an ocean mega-wave, but has to be rescued by “Bodhi” (Edgar Ramirez, “Deliver Us from Evil”). And right from the get-go, his cover is thereby established.

The character-building between Utah and Bodhi is respectable. The dialog, which stays considerably low-key throughout the film, is not half bad, but the “bro-mance” side of the thrill-seeking still gets more screen time than it deserves. What scared me more than anything else was a tense scene of rope-less rock-climbing at Angel Falls in Venezuela, which had my head spinning. But that was it. Some snowboarding, an initiation fight scene, shoot-outs, and some pretty girls at parties on a boat are standard-fare stuff, and nothing raises interest levels except on a few key intervals.

Bracey and the first movie’s Reeves have similar personalities on screen, and their characters come off rather narrowly focused. But this was intentional since it becomes evident that several allusions to the first film were put in to be easter eggs, throw-backs if you will, including Utah purposely missing shots taken at Bodhi as he flees. But the big splotch of glue that holds together the credibility of the whole film is that Utah’s character is in struggle. He yearns to be who Bodhi and his ilk are. A part of him wants it, but life led him down another path.

Overall, the project just doesn’t do enough to arouse our interest or keep us on the edge of our seats in a way that provokes a sense of concern to go with the excitement. Even Utah’s love interest, “Samsara” (Teresa Palmer, “I Am Number Four”) isn’t passable as a serious romance. It is not hard to watch or enjoy the movie as the story develops, but the emotional payoff remains very low right through to the end.

“Gary Pappas” (Ray Winstone, “The Departed”) is supposed to replace Gary Busey, but he can’t. Winstone’s gruff charm is not lost on audiences, but then, this film just never had much charm to begin with.
______________