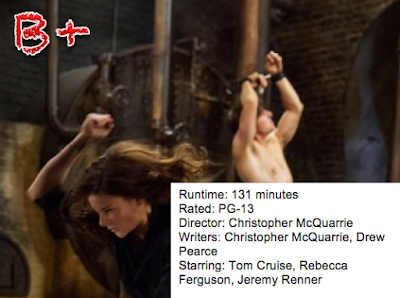 Your mission, should you choose to accept it, is to watch this addition to the Mission: Impossible Line-up. See if you can believe the improbable, balls-to-the-walls stunts and wildly rehashed plot themes. Know that your participation will guarantee two things; 1) Absolute non-boredom and 2) Absolute disbelief.

The long-overplayed spy theme is locked and loaded again in the now heavily thrashed Mission: Impossible series with Cruise who is looking just awesome. Even at 52, Cruise, as "Ethan Hunt," is revived, ripped, and ready to take on anyone. James Bond himself would be proud, but the two differ in at least one huge way: "Rogue Nation" has more vested in its comedy and not a few tributes to the likes of old spy TV show themes than it has in the gravity of its own plot.

This time, Ethan and trusted colleagues are facing off against The Syndicate, another international spy organization with planet-engulfing interests and the power and reach to see them through. It’s a power-struggle of the highest order and with it comes the believe-ability struggle we’ve taken away from all of the other movies. But fear not, those of you who are just watching to have a good time.

Plenty of emphasis is placed on exotic scenery. Most refreshingly, Mission: Impossible - Rogue Nation took its time in finding a successful formula. The first movie, directed by Brian DePalma, was a bit of a lethargic experience. Everything was about the action and focused only on being a summer blockbuster. The second movie was at the hands of John Woo. It was action-packed on an insane level (with a motorcycle chase scene that was more than a little memorable), but the script struggled to give higher-functioning audience members anything to chew on.

The third movie was handled more capably by J.J. Abrams and offered up a cluster of good and bad. It slightly improved on the previous movies’ errors, but it was not until the arrival of the fourth film (Ghost Protocol) that director Brad Bird finally got wise to the formula that worked the magic so well—let Cruise end up in peril more often, with more focus going to the actions of his team and his own vulnerability, which will make him more relatable to all audiences. Success--better late than never!

Simon Pegg is the second man here who dares to offset Cruise as the center of attention. The two do more than just work well together; they mesh like a hand in glove. Speaking of hand-in-glove, this poignant franchise is smartly handled, but not just because of Pegg. Rebecca Ferguson, (as “Ilsa Faust”) who offers her own bang for an audiences’ buck, gives back and then some. Every character gets a chance to make an impression, and Jeremy Renner certainly doesn't hurt things, either.

With all of the rehashed plot devices (not all of which are smart, and some of which are actually rather stupid), we still go away with a sense of adventure by proxy, thanks to director Christopher McQuarrie (known for Edge of Tomorrow and Valkyrie) who takes the reins competently and does well.

The hurried pacing is only noticeable in the film’s midsection, but nothing quite ends up feeling forced. The dialog is a little wittier here than in all of the previous movies. We never really get the impression that Hunt is in danger, nor do we worry if the mission will succeed. But then, if that was your worry going in, then maybe you didn't get the previous films anymore than you do this one.