Life at Pizza Shop is certainly never boring, not when a bunch of teenagers – poorly managed and almost altogether incapable of doing their jobs – are left up to their usual shenanigans of horsing around while seeking to outdo each other in quests of sophomoric silliness.

These quests involve everything from nice stuff like kneeing one another in the groin to the placement of bodily fluids in the foods they serve (the health code violations in this movie by themselves are cringe-worthy enough to make a whole new movie about)! Should you run across such an establishment, I’d advise against eating there, or if you’re not sure, at least try not to piss off anyone who works there like one poor sap does in the film’s opening.

“Pete” (Robert Bielfelt) is the guy with the “Go team!” attitude. “Jason” (Cian Patrick O’Dowd), along with everyone else on staff, can’t stand him. But if their usual allotment of bizarre customers aren’t more than they can stand, they themselves will prove to be to each other. When a prank goes too far, sending Pete over his limits, a battle ensues that will have someone leaving Pizza Shop for good. It may only be a standoff at some no-name pizza shop, but to these guys, it’s a battle to the frayed ends of their dignity.

There is no question that George O’Barts’ Pizza Shop: The Movie is basically guaranteed to do two things; one, gross you the hell out; and two, combine a theme fit for the lowest ranks of bathroom humor in with a story that involves the development of some complex social relationships, with the second half of the film becoming much more meaningful than the first.

The inner-mechanics of working in a pizza joint feel real enough—minus some deductions for a skimpy budget that could have been a bit better utilized in a few small ways. With the inter-personal dynamics and off-color exchanges as painfully awkward as they are, don’t be surprised to feel blown away at just how much of the script totally misses its mark. When the sexual innuendo becomes as painfully overdone as it is here, we can guess from that point onward that this piece is destined for less than great things. But it remains still somehow surprising to take notice at the heaps of dialog and jokes that feel like they were written by someone with fairly limited experience with teenagers and American culture. This surprised me. 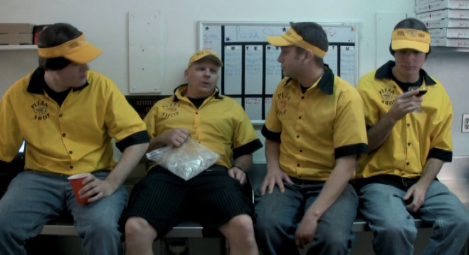 Beyond these considerations, the film doesn’t have the subtlety of humor or the wit to ease up on the insane gags that it is so fond of, or the exaggerations that go on in the lives of some miserably misdirected pizza shop employees. At some places, it feels like a film written precisely with unmotivated high school dropouts in mind; at others, it feels like bad after-school programming from the early 1990s. The lengthy runtime only exacerbates things. The story does go somewhere, however. And although we’ve seen far, far better acting, what we get here is pretty well on par with other indie offerings (as good as some, but still well behind most).

What can’t be disputed is this: Pizza Shop is very well paced, unpredictable, and never boring. And a certain level of praise can be offered up for a film that dares to deal with bathroom humor gags and puts this much work into it. While I was never made to care for anyone as much as I needed to, the transformation of Pete and Jason made the two stand out more so than they otherwise would have.

Despite its lowbrow subject matter, the film is an effort with bigger aspirations than it deserves—for a movie with emphasis on bodily fluids in edibles, it sure tries hard to be more. And in a few ways, it almost succeeds.