Although it really isn’t, I want to say that God’s Not Dead may be the most brilliant atheist troll movie ever made. In its oppressively direct approach from the hardcore Christian camp to tell the world that their creator-ghost isn’t dead, they’ve inadvertently convinced or re-convinced those of us who are normal that capital “g”od can’t be real and that most believers are, in fact, staggeringly shallow idiots.

The movie follows the plight of college freshman “Josh Wheaton” (Shane “High School Musical 2” Harper) as he registers for philosophy class as one of his electives. His professor is “Professor Radisson” (Kevin “Hercules: The Legendary Journeys” Sorbo), a radical atheist who (for some strange reason) demands that all his students forego the debate on theism by just signing a sheet that reads: “God is dead.” Of the 80-something students in the class, only one objects to go along with the signing––young Josh, who is told by the perpetually angry, proud professor that he will fail if he does not succeed at debating the existence of God before the class, resulting in a favorable vote from the audience.

Josh’s girlfriend, “Kara” (Cassidy Gifford), does not approve. She sees the debate as a clear way for Josh to fail and thus not get to attend college together. No one in Josh’s life approves of his debate, much less his parents who are strangely absent from the whole film. Can’t anyone understand a young man following his convictions? What’s so hard about that? 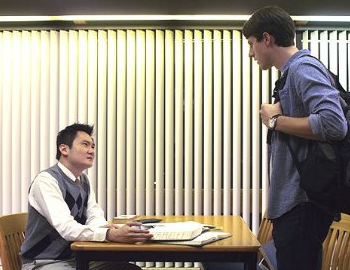 In its defense, absolutely no one in God’s Not Dead has a clue of how humans interact. If an intelligent alien species intercepted a copy of the film and watched it and then made contact with humans, I’d be afraid of how disappointed they’d be with observing real, actual people who are not cookie-cutter stereotypes from a Chick Tract.

The film’s focus is divided between various parties; a devout Muslim family with a Christian daughter, a minister “Pastor Dave” (David A.R. “Jerusalem Countdown” White) and his way-too-happy evangelist friend (Benjamin Ochieng), a woman of faith with Alzheimer’s disease, a big business jerk (Dean Cain), an atheist reporter with cancer (Trisha LaFasche), and the professor’s own girlfriend (Cory “Beverly Hills Pawn” Oliver) who is also a believer in Christianity. The predicaments in their lives are about as comically off as the writing behind who they are and what makes them “them.” And as events start to come together between them, things get worse instead of better.

Remember how I said the movie may be the greatest atheist troll movie ever? Well, let’s revisit that. Because of the statements the Christians make, it is as though the words put in their mouths were designed to draw the utmost ridicule: “I feel like God would want someone to defend him.” This Josh says, followed immediately by his smarter girlfriend: “Don’t be silly.” The creator of the universe needing a lowly meatball – and not even a mature meatball – to defend him against an experienced atheist college professor, silly? No! Surely that’s not silly!

These and other such statements continue, usually with moving music, dished out with sentiments not unheard of right from the mouths of any country Baptist church-attender; take, for instance, a statement by a redneck: “My life belongs to God.” He hunts and serves as a well-respected symbol of dignity, intelligence, and manhood in the South. These and other clever statements are made by none other than Duck Dynasty’s own Willie and Korie Robertson who play themselves. I guess director Harold “Jerusalem Countdown” Cronk thought the image of a country boy holding up dead animals is a real aspired-to status symbol among the faithful. I guess he’d be right.

And then there is: “You know the truth!” It’s classic “you know what I’m saying is right in your heart if you listen to the Holy Spirit” religiot claptrap, delivered en mass with increasingly frequent god-drops given at every possible juncture (I’m a Christian!,” “What about God?!” etc). 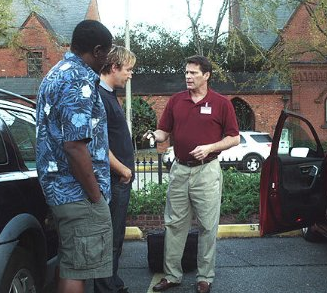 But the fun for us non-believers only gets better the more we step back to ask why this is so. Consider the snobby, self-important atheist reporter facing cancer, or the son of the woman with Alzheimers who is so overtly cruel and materialistic and careless that he can sneer openly at his girlfriend (the reporter) who has, only seconds before at the dinner table, announced that she has cancer.

You see, in the militant Christian mindset, secularists are only and can only be evil. They walk around like goats, proverbially head-butting anyone and everyone in sight. They believe this…and then make a movie about how empty, tortured, and tattered the lives of the faithless are without a deity reigning over them. They do this because they feel “persecuted” for their faith. Grounds could be made for assault on Josh by Professor Radisson for grabbing him aggressively. Believers have him act this way because that’s how they view their opposition.

So what is it with a professor so militantly atheist that he requires students to denounce god to pass? The entire movie could have even been avoided by having Josh go to the dean over this gross exploitation of his religious liberty, and any institution that values its credibility would back him. But that would circumvent the movie, which had to provide a bunch of scripted opportunities to display how crappy everything is without old jeebuz running things up in the clouds.

The interpersonal dynamics are so off that it would indeed be difficult to imagine them being more so. This, of course, is more credibility on the conviction by those of us who live in the real world that Christians simply live in their own hollow fantasies where nothing matters except Bible reading and how the enemies of Christianity are bitter and angry with obviously messed up lives.

But there is more still; God’s Not Dead is billed as a comedy, as well as a drama, so not only must we deal with rotten portrayals of the godless, but bad smalltalk, cars not starting to allow old god the chance to line up his providential plans, and the usual making out of atheists to be “lashing out” at a god they supposedly don’t believe in.

Since before The Omega Code, Christian movies have been suffering this cheesy fate (for a non-cheesy example, consider The Book of Eli). And it isn’t just atheists who feel that way. Christian film critic Linda Cook, in her review, states: “Continually, I bemoan the fact that viewers of faith – and I’m among them – are under-served when it comes to high-quality faith-based films.” Well said.

A Christian film is not undone simply by being Christian, or by promoting or suggesting said ideals, but by failing to deliver the message with credibility intact (and this has always been the problem).

This one could have succeeded. With a few misdirections and even – dare I say – some subtle placements/surprises put in, this could have conceivably been re-written to work. Despite its gross shortcomings, its target audience may find a soft spot for it. Citations of scripture are delivered in such a way as to evoke emotion in a film already filled up with it, and much of the acting is surprisingly on point, resulting in a full letter-grade bump from this apostate. That makes this still somehow one of the better of the really bad Christian movies. Scary, huh?