March 23, 2014
In Heaven There is No Beer is the story of the Los Angeles “Kiss or Kill” music scene (2002-2007). Fed up with the posh elitism in an industry filled with commercialist greed and conniving self-interest, a group and their devotees set out to carve their own niche in the music world.

Sickened by the Sunset Strip’s elitist “pay-for-play” policies and the over-the-top trendiness of the Silverlake scene, up-and-coming bands and their fans decided to break all the rules by falling back on the appeal of original music, cheap booze, ridiculously low cover charges, and a homegrown sense of welcomeness and community. And it worked.

Kiss or Kill peaked out with over 60 bands and more than a thousand dedicated fans behind them. From there, we watch as the growth of the movement lends itself back to becoming a threat to what it originally stood for.

Unless you follow the indie music scene, you’ve probably never heard of any of the bands featured here (some of the featured bands include King Cheetah, The Dollyrots, Bang Sugar Bang, The OAOTs, and The Letter Openers). But watch and you’ll hear their story and be able to relate to the struggle that threatens all newbies who get caught up in the growth cycle of success, only to finally become what they hate most.

But there’s more here than just the brief history of a movement most aren’t familiar with. From the bands that support one another through the most humble of beginnings in the backs of seedy clubs, to the jealousy that develops between rivals on their way up to the top, there is the passion of pursuing dreams.

Being rapidly paced, the documentary shows the value of community amongst artists in their attempts at self-expression that most will easily relate to. More than that, it will give all a crystal-clear picture into what it’s like to be an underdog band trying to get their shot at the big show.

Perhaps best of all is that here, we get no music “experts” or paid celebs endorsing anything. The grainy footage and off-sounding voices, recorded in poor conditions with humble equipment, are somewhat of a testimony to their labor of love. The young performers - no doubt wreaking of booze and sweat before, during, and after their performances - are nonetheless primarily riding off of the high that comes from performing before a crazy crowd that madly cheers them on.

Yes, the subject matter reaches out to a fairly narrow audience. And no, the narrative doesn’t grip or move us to or beyond what we would expect. It doesn’t propose or deal with a solution to a problem of global proportions, but it does tell a story of pursuing a vision, followed by a love of self-expression. In an industry dominated by big and bigger names, it’s hard to get recognized. 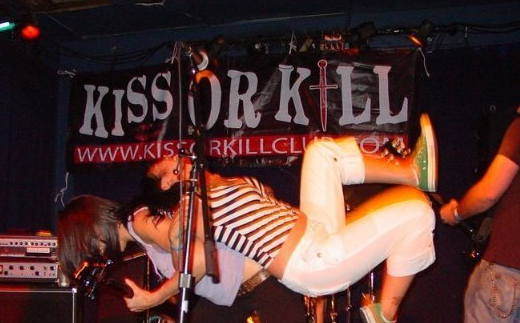 The DVD release includes a photo gallery with Director’s commentary, as well as notes on the film, deleted scenes, full-length live performances, some trailers and promos, and over 30 minutes of bonus materials. Not many films embody the spirit of Indie-ism as well as is done here.