February 04, 2014
It seems like ever since 21 Jump Street, Ice Cube has been making more frequent appearances in films. In Ride Along, he is “James Payton,” a veteran cop who takes his sister’s boyfriend, “Ben Barber” (Kevin Hart) on a ride along of the tough streets of Atlanta to test his worthiness as both a potential cop and a man.

Hoping to win over James, Ben jumps at the chance for not only himself, but because it was requested by girlfriend “Angela” (Tika “One Life to Live” Sumpter) who remains close to her brother. But Ben - only cool or skillful in the world of video games - is just not ready for the challenge that awaits.

James’ obsession is with a faceless criminal mastermind who has been evading the authorities for years, a man named “Omar” (Laurence Fishburne). Can Ben, a mouthy security guard who just wants more out of life, stumble his way onto helping him find him? Need I point out that since he messes up so very much, that he’s eventually bound to get something right? This has all been done before, so you know the answer. In the meantime, Ben is just another pain in the ass for James. 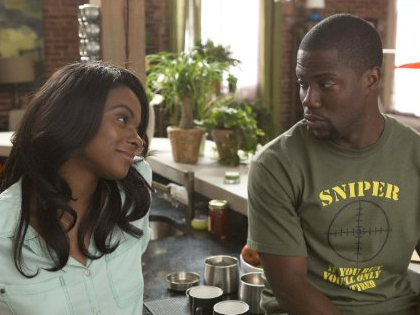 Ice Cube has demonstrated many times that he is better in supporting roles rather than lead ones (he does so again here), but his role as an out-of-bounds, “ignoring the rules of engagement” cop who does things his own way is too familiar to let his talent shine. Next to rambunctious comedian Kevin Hart, he exhibits a nicely laid-down odd-paired energy. The problem simply is (as it has been from the get-go with this project): It isn’t done that well, the storytelling skills suck, and it doesn’t offer enough laughs to justify waiting for Hart’s next soft-hitting one-liner.

When it comes to indignant bosses getting onto good-but-quirky cops for not having leads pan out and jumping on screen just long enough to tell them to “clean your shit up,” it simply reminds us of what the film never tries to do—be original or just something more than a smile-worthy endeavor for when we’re bored.

The film’s pacing drags us along, at times making us want to glance at the watch as we wait patiently for the next segment where Hart’s scratchy voice and disturbing antics will mess things up in one of the many public scenes he makes.

Tying up loose ends, we aren’t made to laugh nearly as much as we go in wanting to, nor are we given a story that wants to do anything except allow it to finish up should we find ourselves watching out of sheer boredom. I’m a fan of both Ice Cube and Kevin Hart, and so I say with love that it would not have taken much to make this work. As it is, it simply doesn’t.