December 08, 2013
Of two sisters in a royal Norwegian family, “Anna” (Kristen Bell, voice) has a nagging problem; “why has my sister been locked away from me for all these years? Things were so good as kids, but from there, no more good memories. Why?” But Anna isn’t the only one with a problem. Her elder sister “Elsa” (Idina Menzel, voice) has a problem that is much more serious; “how can I control my ice woman-like powers of frost and not destroy everything and everyone around me?”

After her parents die and leave Elsa the throne and an accident at her coronation reveals her powers, all the kingdom perceives her as a threat. Her angst throws the land into an eternal winter. Anna must find her and make things right to save everyone, but she’ll need help. The one who has her heart, “Prince Hans” (Santino Fontana, voice) will not be enough. She’ll need the help of a gruff ice salesman (Jonathan Groff, voice) with his trusty sled and moose, some happy trolls, and a snowman named “Olaf” with a wonderfully astute sense of perception (Josh Gad, voice). Now, she has a real shot at success. 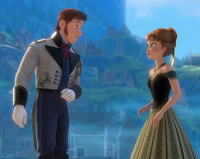 Based very lightly on the 19th-century work The Snow Queen by Hans Christian Andersen, Frozen is like no other fantasy film you’ve seen (as you could no doubt tell just from reading the description) and certainly like nothing else from Disney. While a smattering of elements from favorite animated movies like Shrek, Tangled, and Snow White are delightfully brought to mind in the viewing, nothing is a rip-off of something else and everything brings in the innocent glee mixed with adventure as in a viewing of Robin Hood or Cinderella growing up.

The time flies right by as this clever adaptation makes its own mark on a genre of often simplistic and silly movies for an ADHD generation where substance is usually found wanting. Not here. This perfectly paced and always engaging film sports some well-spread-out musical numbers that are as expertly put together and energizing as the writing overall. 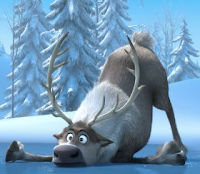 The original script, which went through many re-writes before being picked up by Disney, takes its own stab at old-time storybook credulity (the way we knew it) while giving into the same soft spots traditionally made to appeal to the young and innocent. What will perhaps be the most to take in will be the perplexing and unusual plot structure that will bend and twist in its frequent tendency toward misdirection. For this reason, audiences may find it an adjustment with older members being drawn in and extremely young members finding it too intense or confusing at scenes of peril. But not to worry—the enchantment is right where it needs to be, cushioning the experience for all.

As is the case with great movies, its characters are as varied in complexity as you could expect and beyond what you would be prepared for in anything animated; in particular, I’m thinking of Josh Gad’s Olaf (seriously, one of the most adorable characters ever and unlike any other) and Alan Tudyk’s “Duke” as outstanding examples—yet another way in which viewers will find the details approaching over-stimulation and the curiosity birthed by the story’s ongoing tendency to surprise us as a good thing. Frozen misses nothing—neither the wit, nor the maturity, nor yet the magic. Hands down, it’s one of the best films of the year.