Even more outrageous than the first Machete movie, Machete Kills gets a running start right into a totally new (but certainly not unexpected) level of absurd action-comedy that stretches the limits of just what we are willing to forgive in the name of a stupid good time at the movies. But a good time at the movies this certainly will be for anyone who appreciated the first film.

While the original movie suggested at least the possibility of a supporting actor like Danny Trejo made into a leading star, the second film leaves only a little doubt as to whether or not this happened with any sort of payoff. Although he is probably still better as a supporting actor, Trejo not only succeeds as a star, but manages to garner some level of respect in a role that really doesn’t deserve any. 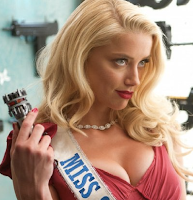 At the beginning of the film (where Jessica Alba briefly reprises her role in an opening cameo), Machete and Sartana are in Mexico intercepting an unauthorized arms deal to the cartels when it becomes apparent that the government corruption behind the deal runs deep. After an unsuccessful attempt at botching the operation, Machete again finds himself working for the U.S. Government to infiltrate and bring to justice a Mexican Revolutionary named “Mendez” (Demian Bichir) who controls weapons of mass destruction—this while coming into contacting with an even bigger player (Mel Gibson) and while being hunted by a faceless, chameleonic mercenary (Walter Goggins, Cuba Gooding Jr., Antonio Banderas, Lady Gaga), and a brothel of lethal ladies lead by “Desdemona” (Sofía Vergara). But of course, Machete is the real weapon of mass destruction here. All parties just don’t know that yet.

While throwing in several sizable surprises amidst a completely preposterous plot awash in smut, silliness, and satire, Machete Kills pays homage to classic sci-fi and a hell of a lot else while making us wonder just where the story is heading. 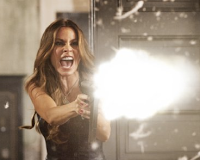 As ballsy as it is corny and willing to take the viewer on the same sort of unlikely misadventure as before, the overpowering sexual spoofs, like strap-on breast machine guns and crotch attachments, don’t exactly detract much since most will go in expecting more of Robert “Sin City” Rodriguez’s extravagant humor.

Rodriguez has his own style and stays true to it throughout. I can think of a few things I would have cut out of the story – it being full of sneeringly bloated plot points and other silliness done solely for effect – but it is hard to knock a movie that takes itself this non-seriously. The film’s over-the-top and caricature-ish handling of political hot-button issues like border control and immigration enforcement is, again, just another part of the fun.

As fun as it is patently absurd, this was a good time at the movies, falling just shy of the first film’s high marks. And after my viewing and much deliberation, I am ready to state for the record that Machete might even be a match for Chuck Norris!