Director James Wan (Saw, Insidious) manages to revive our faith in Hollywood horrors in The Conjuring, a movie bold enough to tread new ground while respectfully paying tribute to the classics—all the while scaring the ever-loving shit out of audiences everywhere!

The film is an investigation of one of Ed and Lorraine Warren’s most outstanding accounts from their files regarding the Perron family about the haunting of a Rhode Island farm. Accusations of witchcraft, baby murder, rape, suicide, and multiple brutal homicides are just part and parcel of a story that goes back eight generations. And when the details of the story start to seem it bit too much, we research it only to realize that any embellishments done to enhance it were few and far between.

It is 1970 and Roger and Carolyn Perron (Ron Livingston, Lili Taylor) just bought a new house on 200 acres of beautiful Rhode Island land. The old barn, which still stands, and the house next to it seem ideal for them and their five young daughters to grow up on. But from the first night that they arrive, strange things start to happen. These occurrences get worse, resulting in their reaching out to demonologist and so-called “Trance-medium” Ed and Lorraine Warren (Patrick Wilson, Vera Farmiga).

When the Warrens get involved, the incidents become more severe, even physically harmful. “You have a lot of spirits in here, but there is one that I am most worried about because it is so hateful.” says Lorraine. Farmiga’s Lorraine Warren is one of the most heartfelt roles of her career. Even with seeing the by-now-familiar old clothing and dead people from a bygone age, Wan still knows how to make us feel like we are in mortal danger just sitting and watching.

Helping matters not at all is Ed and Lorraine’s involvement with this story (what with the big Amityville hoax and all). For that reason, we ought to have another reason to be suspicious, as the two are portrayed intelligently, as logical, problem-solving people who always look before they leap. But leave it to the real Perron family to not only appear in a trailer in clips with the casted family, but listen to daughter Andrea Perron (who got to attend a prerelease screening) vouch for how accurate in most of its details the film is.

Everything from the Annabelle doll to the home collection of allegedly possessed artifacts stored in the Warren’s home, right down to the suspected witch “Bathsheba Sherman,” were “confirmed” by local folklore. The account is based on findings of the family as told in the book by Andrea Perron entitled “House of Darkness House of Light.” If one modern horror movie can be said to stand out as making us want to believe it is real, it is this one. 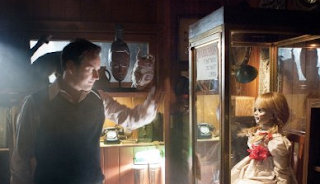 That, however, is not a lasting impression. While its performances demonstrate a reserved competence throughout, the pacing clusters from a fast, compelling start to a fall-off in a mediocre mid-section, to a bombastic and overdramatic ending. It is at the conclusion that we find ourselves having to look past a finale that simply tries too hard to go out with an emotional “bang.” Hurting it almost as much, some of its scares tend to be on the predictable side, even some that are pulled off most effectively.

Since the “footage found” horror silliness has (thankfully) run out of steam, it’s nice to see the void filled with something that has enough dignity to make us want to a) want to believe it, and b) to want to sympathize – and actually fear for – the victims. The Conjuring easily does both while effectively scaring the poo-poo out of audiences already plagued by the eerie mood that the opening puts them in.

Unlike most “based on a true story” horrors, this one enjoys endorsement from the family who lived in the house (called The Old Arnold Estate) for over ten years and continues to receive supernatural reports (although much less sinister ones) from later owners of the property.

We can look harder to see if we can spot discrepancies, but some may not really want to. Giving possession fans what they want and then some, it could even be one of the scariest movies since 1973’s The Exorcism. And it gets its rating not from smut, excessive gore, profanity, or cheap shock value, but by scares alone!