While most of us would relish the thought of not ending up in a haunted house, An American Ghost Story (formerly titled Revenant) introduces us to someone who is the exact opposite. “Paul” (Stephen Twardokus), a struggling part-time writer, decides to move into a reportedly haunted place precisely for the purpose of finding a malevolent spirit.

In the course of investigating the gruesome murder of one particular family, his obsession with the supernatural has him renting the very property that said family was murdered in. Newspaper clippings of the event are posted on his wall. 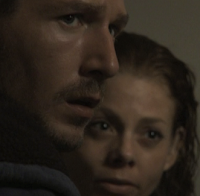 His girlfriend “Stella” (Liesel Kopp) humors his infatuation with morbidity, going so far as to help him arrange and decorate the former room of the youngest boy to look like it did at the time of the incident, but she can only tolerate so much of this morose quest to better himself. And that is where Paul’s fixation comes from—from a sense of personal dissatisfaction.

Tired of being the quitter he’s always seen himself as, Paul is trying to write a book on a real haunting, one that goes beyond strange sounds or simple noises in the night. But once his obsession evolves into a mentally and physically dangerous one, any remaining chance of turning back begins to diminish.

Initially, the more he investigates, the more dead ends he runs into, until he comes in contact with “Sue” (Wendy Haines), a former resident of the house, who gives us one of the best performances of a mentally disturbed woman anyone could hope to ask for... 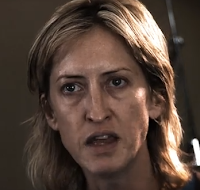 Sue (grabbing Paul): “You have to get out of there now! Don’t you understand? It’s trying to kill you!”

Sue: “It will alienate you from everyone you love and then it will come after you! If it’s showing itself to you, it’s only going to get stronger! You have to get out of there! It’s going to kill you!”


The film has been making the rounds since its release at the close of 2012. Hailed as a favorite by the Shriekfest Film Festival while enjoying lavish praise in the indie circuit, An American Ghost Story will be released on DVD August 20th.

Filmed out of director Derek Cole’s own house, the flick so effectively combines elements of paranoia, possession, and fear of the unknown that it can deservedly be called one of the scariest films of any budget level. 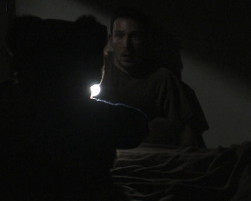 Beyond the expected budgetary issues (a few needed re-shoots, slow-to-start pacing, and some coarse performances), we gradually forget about these and focus on the hellish nightmare that our lead man has gleefully chosen to jump into. I can only think of just a few things I’d have taken out had this been my project. What I can’t think of is how I could have made this movie any scarier! I can’t remember feeling this scared since I was 7 and running into mom and dad’s room after a sneak viewing of Poltergeist!

Cole and Twardokus are masters at coordinating suspense with aggressively delivered surprises, causing even mundane shocks to cut like a knife and widely familiar frights to enjoy a new lease on life. Of course, what isn’t familiar goes that much further. With superb editing and truly immaculate choreography, An American Ghost Story is the DVD sleeper of the year, an absolute must-see for all true indie horror fans.