Killing Season, originally titled SHRAPNEL, is the story of two veterans of the Bosnian War – one American, one Serbian – who clash in the remote Rocky Mountain wilderness.

“Benjamin Ford” (Robert De Niro) is a former American soldier who fought on the front lines. When we meet him, Ford has retreated to a remote cabin in the woods, trying to escape the painful memories of a long and brutal war. His family and newborn grandchild seldom get to see him.

Upon meeting “Kovac” (John Travolta), a former Serbian soldier who seeks Ford out to settle an old score, we are taken aback by what they seem to have in common—ruining memories of soul-destroying pain. But what begins is a cat-and-mouse game in which Ford and Kovac fight their own personal battle along with the struggle to stay alive. By the end, wounds are opened, suppressed memories are drawn out, and long-hidden secrets about both Ford and Kovac are brought to light. 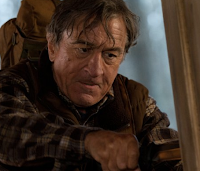 If anything can be said of Killing Season, it is that it is the type of flick that critics and viewers alike love to sneer at for its smattering of imperfections. Far from being A-list material, it is more like Saturday Matinee or direct-to-DVD stuff and is a highpoint for neither De Niro’s, nor Travolta’s career. Garnished with sadism and gore, this movie is a raw look at the horrors of war as they take their toll on two men put in circumstances that neither could see the outcome of.

It’s been a while since De Niro picked a good role for himself, but Killing Season – despite its many faults – utilizes quite well a few of his more recessed, explosively dark qualities. Although many have remarked negatively about Travolta’s troubled accent or general lack of a fit for his part, the two bring the tension needed to make this tale appreciable—this despite some poor editing and scenes that should have been re-shot, and despite acting that falls significantly below par for both. 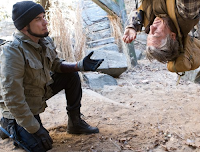 What is actually due some scorn is the two’s constant one-upping one another for the vast duration of the film in a most unconvincing and cheesy manner, but in terms of what its story brings, it is a noteworthy success that defies the typical big-budget Hollywood stereotype and makes us want to look past its dodgy action and sometimes poorly executed takedowns.

Go in with the lowest of expectations for sure, but be prepared for a story that aims to break out of its humble, inadequate shell (the movie deserved way, way better than this). For the right viewer, Killing Season just makes the cut.