Brad Pitt having anything to do with the zombie apocalypse genre is a new phenomenon for sure, but that doesn’t begin to keep him from running with his role in a World War Z, a film that tries very hard to offer up something new (whether it actually does or not will depend on the individual).

“Gerry Lane” (Pitt) is a former UN intelligence officer who has moved on in life until his home in Philadelphia is inundated by an outbreak where the infected masses initiate what is called (in so many words) a “zombie” attack. 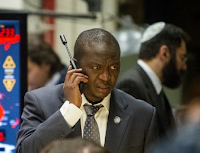 With fervent protesting from his wife (Mireille Enos) and kids (Sterling Kerins, Abigail Hargrove), Lane is compelled to head up the highly sensitive mission to find patient-zero with a specially assigned team of doctors to create a vaccine. But when the plan goes sour, Lane is following clues with little help from the experts to get to the bottom of the mysterious infection that has wiped out most of every city on earth.

Directed by Marc (Quantum of Solace, Stranger than Fiction) Foster, the story comes from Max Brook’s work of the same title, featuring multiple accounts of survival when government and society have lost all control. With hefty deviations from the source material in the name of on-screen drama, it is that material that goes a long way toward accomplishing its goal of remaking the genre.

Although it is heavily debatable whether or not this was an appropriate role for Pitt (I can think of a number of A-listers who could have filled the spot more suitably), Pitt owns his character with amiable diversity, which is a good thing since the movie at first appears to offer us nothing special whatsoever. 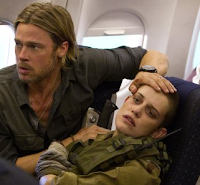 A few of the same mistakes (such as personal cell phone use amidst full-scale disasters and a couple of the familiar “knick of time” saves) don’t keep the work from developing into a soundly watchable and almost compelling mission.

And while many zombie flicks lower their standards to include the same predictable nonsense and futile gore, all we have to really put up with here is humans shrieking like hawks (and why?) and a strongly mismatched chemistry between Pitt and Enos.

The dialog stays on the smart side while the story itself and its reliance on clues and wit rather than cheap scares is perhaps the saving grace since the plot tempo takes a while to build up enough speed to engulf our full sympathies, but the overall family dynamic the film shoots for goes a long way toward winning a much larger audience percentage than any film of this sort.