Intelligent filmmaking isn't dead yet; that's what Steven Knight's Redemption (originally titled Hummingbird) shows and tells us as it introduces us to a broken man on the run from a court marshal, ex-special forces agent “Joey Jones” (Jason Statham), who spends his days as a vagrant on the streets of Manhattan. Consumed with painful memories from a past best forgotten, Joey is a multi-tiered mess of anger, regret, and confusion as to where his life will lead him next.

When he comes across an opportunity to assume another man’s identity, a chain of events is set in motion that allows him to use his military skills to make money when he is taken in by a Chinese crime syndicate and handsomely compensated to do their dirty work.

Eventually, Jones comes in contact with a nun who runs a charity program, “Cristina” (Agata Buzek) who, in her own way, seems as conflicted about her life as he is. As the two form an enduring bound, a door is opened allowing Joey a chance at redemption (peppered, of course, with cold vengeance).

There is no question of it that Statham is one of the hottest and most admired names in the action genre today. But you can lose any expectations of seeing him go shirtless to face off against cheesy boss enemies that belong in a videogame, or charm clueless girls in a bizarre rescue mission that can only seem real in some machismo “tough guy” reality.

Redemption is one of the most – if not the most – story-heavy actioner of any of Statham’s works thus far. What it manages to accomplish appeals to our sensitivities, as well as satiate the need for raw entertainment. The Joey Jones character has too many sides to him to warrant scene after scene of bullet-dodging, lucky shots, and ass-kickings. No, this damaged individual catapults us into his life and that of his mousy infatuation, and it takes us totally off guard in so doing.

One of the things most easily forgotten in any film is that the conduct of its characters has consequences and sometimes we don’t get what we want in life. The ugly tale of what it means to be alive is sometimes best told by a drunken man whose longing is to stay intoxicated for no other reason than to avoid maiming or killing anyone else (as is the case with our main man). 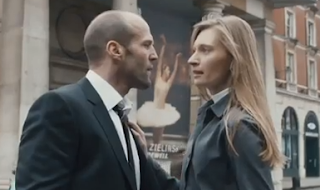 Among other things, director Steven Knight’s work called for better editing, and it doesn’t always make itself easy to follow the dialog or the plot with its stunted and heavy British accents or its hard-to-follow screenplay. But it deserves every bit of the respect it has coming to it for offering up substance in a thematically disturbing movie where swift and blinding vengeance becomes the goal of its star. There are fewer fight scenes in Redemption, but the ones we get boast extreme restraint in the writing.

When we get to see Joey kick a bunch of thugs out of the restaurant he works at, he does so as a man who wants to end trouble rather than finish them off with a roundhouse kick (much to the delight of a simplistic audience). Every chance the film gets to take on meaningless, macho silliness, it proudly goes in the other direction and keeps focus on the play-out of events. This is one of Statham’s best and most note-worthy films to date.