In Dead in France, a romantically and socially inept assassin hires a cleaning lady and entrusts her with his nice retirement home before heading out on his final job. What he doesn’t know is that his cleaning lady has a loser boyfriend who is granted access to the house by her. This boyfriend has two thuggish Brit friends who will get in his way more than once—all this while a rival assassin is hot on his heels.

The assassin, “Charles” (Brian A. Levine) is an eccentric germ freak whose character nuances are enticing to say the least. And while we come to like him for the part, our eyes go off him and onto his succulently attractive help, “Lisa” (Celia Muir) who can be elegant, classy, and funny, as well as sexy with just a smile. Her graceless, doltish, hideously unpleasant (but somehow still charismatic) piece of trash boyfriend, “Denny” (Darren Bransford) is ruining everything around them. The hilarity from he and his friends and influences – though certainly measurable – is one of the many subtle payoffs from watching.

Charles' greatest threat is “Clancy” (Kate Loustau). If she just stepped up to actually play the part of an intimidating killer, she’d do well; as is, she provides more stand-in caricature-ish comedy relief than she does hardened assassin. But no matter since everyone here takes a back seat to the script’s preposterous direction in which the story can’t fully grow. 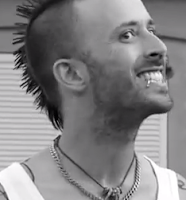 Filmed in black and white for that retro feel and with plenty of sexual innuendo, Dead in France is as implacable and bombastic as any indie work has dared to be in a good while—this while exhibiting qualities Tarantino himself would greatly admire. Even the preference for sick, brain-spattering humor and bodies dissolving in acid are handled with an unexpected amount of finesse.

But unfortunately, we never get to completely appreciate the story since its ending is a totally deflating experience. It is as if director Kris McManus decided to artfully craft a beautiful project, being careful to secure the best acting from the talent available, and then throw it out like a child tossing away a toy when done playing. Shame since this funny and very well-paced work demonstrates some fine filmmaking skills that could and would have put it in the ballpark of A+ material. As it is, it might still be considered a light recommendation for Noir-ish indie film buffs of all kinds.