Gerard Butler’s return to the big screen didn’t go off quite as planned. There are gunfights with automatic weapons, terrorist standoffs, and tons of explosions with property damage to boot. There are White House officials in serious briefings and others tied up with guns to their heads, but Antoine “Training Day” Fuqua’s new patriotic action movie doesn’t cut the mustard.

Olympus Has Fallen is about disgraced presidential secret service guard “Mike Banning” (Gerard Butler), who, after an accident involving the First Family, is estranged from “President Benjamin Asher” (Aaron Eckhart). But when a terrorist attack makes its way to the White House, he must use his skills and inside knowledge to rescue the commander-and-chief, along with the president’s young son, “Connor” (Finley Jacobsen).

When the White House becomes a battleground lost to the nation’s enemies, “House Speaker Trumbull” (Morgan Freeman) is put in place as acting president. The leader of the terrorist effort is “Kang” (Rick Yune) who reminds us every time he is on screen that he is supposed to be not just a bad guy, but a super-bad guy, with hardcore training under his belt and an ego to match. It’s the stuff simple people are impressed by.

The film incorporates everything from sought-after nuke codes to the possibility of an inside mole, but it doesn’t rise to the occasion. This essentially means that watching the trailer and using your imagination may be better than seeing the movie. Such high aspirations, such a low bar!

It would, for instance, have been nice if things had at least made sense if you’re going to portray a takedown of 1600 Pennsylvania Avenue. What we get instead is a dedicated star like Butler who shows us he really wants to turn up the heat and make an impression, but his co-stars aren’t working.

And unless they’re Harrison Ford, presidents in movies just don’t act much like politicians, but like family men who struggle like everyone else. If you’re like Eckhart, you have that and the added “wooden” look and no skills for the role. Honestly, this has to be the worst I’ve seen him, bar none. 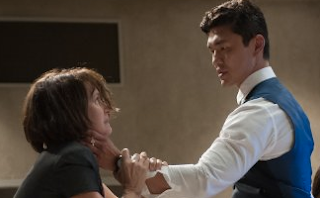 And then there is Freeman who obviously couldn’t so much as show us he wanted to be on film. Even the supporting cast members were not solid picks. Space would fail me to take issue with the lighting and camerawork since many scenes were filmed in nearly no light at all or from peculiar angles.

When the acting isn’t bad, the story undermines most opportunities to enjoy the action since it never makes much sense a) how the enemy combatants get a fully armed plane as close as they do to the nation’s capital, or b) set up scores of heavily-armed ground troops to fight off the secret service.

When all of the street-level chaos has ensued and the good guys are getting swatted like flies, we somehow don’t feel the heat from any of it. Nobody makes us feel like anything major is going down, even as the nation’s leaders are hashing out a take-back strategy—with dramatic pauses and mostly blank stares. And with “filler” urgency statements like: “Goddamnit, where’s that response team!”, we soon lose hope of anything actually convincing being thrown our way.

But what we can’t take from it is that Butler has some damn cool one-liners! It’s just the rest of the time that we are wondering why the White House lawn is as dark as a Harlem alley when it would be lit up by the armed forces like a fireworks display before nightfall when under attack!