While the first two Iron Man movies had the combined value of action, humor, and a lean storyline that was digestible with no unwanted extras, you can forget about all of that in the third addition.

We begin in 1999 when “Stark” (Downey Jr.) and his then-girlfriend “Maya Hansen” (Rebecca Hall) have a chance encounter with a disabled man by the name of “Aldrich Killian” (Guy Pearce). Stark decides not to back Killian’s budding project AIM (Advanced Idea Mechanics = genetic enhancements with nanotechnology originally intended to provide cures for war vets and those suffering from serious disabilities). 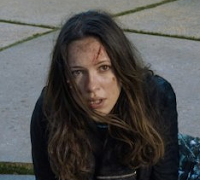 And then we are back to the present. It has been years and the to-be villain Aldrich is no longer crippled, nor are his patients. They now exhibit super-human powers—either that or if the treatment doesn’t take, they die by horribly exploding (we can forgive it, but the concept is really the kind of criminal genius we’d expect as a component in older “mad scientist” horror movies). This is at a time when the government is facing a crisis in a terrorist movement led by a man who calls himself “Mandarin” (Ben Kingsley).

Meanwhile, Stark has seen better days. His hotheaded arrogance is there, but with the world at his fingertips, he isn’t sleeping well and is having panic attacks. His time is spent trying to best his own efforts with the creation of new and more powerful Iron Man units, but his relationship with “Potts” (Paltrow) has taken a nose-dive.

After an attack on a friend, Stark rashly calls out for vengeance on the parties responsible, which unknowingly puts him on a path to Albrich…and his red-orange, spotted, glowing henchman with surprisingly undefined powers that somehow make them a serious threat to a fully-suited Stark or “Col. James Rhodes” (Don Cheadle) known as “War Machine” or “Iron Patriot.” 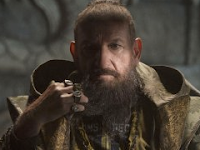 When the conflict is in full swing and Stark is presumed dead, he is unknowingly relocated to Tennessee where he meets who will be his young sidekick to help him make repairs—of course, the sidekick has to be an isolated, outspoken 10-year-old, “Harley” (Ty Simpkins). And here is where things become more like a made-for-TV sci-fi (granted, one with a budget on steroids).

The script may be smart, but it’s a traffic jam of loud, colorful, and flying pieces of smoldering steel. The extravagance is in explosions, helplessly kidnapped presidents, bizarre mutations, and even Pepper who does her own share of ass-kicking. But aside from a made-introspective Stark with an epiphany, there is not really a lot for us to think about.

Iron Man showing his “iron” in character may be an intelligent way of showing Stark’s strength outside of his suit, but it simply wasn’t the best direction in which to take the film. It seems Black was more concerned with wrapping up the series (and why was there a need for this?) than in just doing something novel and cool. This makes the third addition, at the very least, not as inspiring as the previous two. 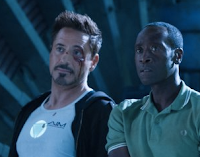 There are no clever or otherwise memorable villains in IR3 (all the result of hazy and badly executed concepts). The storyline – which is, once again, getting credit for being thoughtfully mapped out – doesn’t fit the needs of its fans. There are no Easter eggs to earlier characters or themes, and Iron Man doesn’t even get to really “show up” his foes. In fact, there is very little other than Downey Jr. and some way tuned up humor that is appealing or compelling.

Iron Man 3 just doesn’t abide the dignity that one of Earth’s elite defenders deserves. And in addition to leaving us with questions about certain plot mechanics (like how Don Cheadle’s Iron Patriot suit could be so easily hijacked by Albrich when they are supposedly coded to the individual), we don’t even get to quench our superhero thirst, as Stark’s latest suit is a non-combat-ready piece of junk!

I wonder how long it will take people to see past all the hype and realize that it falls way behind the movies that came before it.