“Emily Taylor” (Rooney Mara) goes to pick up her now-freed husband “Martin Taylor” (Channing Tatum) after he is released from serving a four-year prison sentence for insider trading. Shortly thereafter, Emily drives her car into a brick wall in an apparent suicide attempt. Her psychiatrist “Dr. Jonathan Banks” (Jude Law) agrees not to commit her if she will start seeing him on a regular basis for treatment. She agrees and goes home.

After a failed series of antidepressant drugs – each presenting some unwanted side effect she can’t live with – Banks puts her on a new and experimental drug recommended by her previous psychiatrist “Dr. Victoria Siebert” (Catherine Zeta-Jones). The drug is called Ablixa.

Emily begins to sleepwalk. Martin doesn’t like it, but she can live with it and feels like it is making changes for the better. It seems like a harmless side effect…until she stabs and kills her husband, and later, does not recall the event. 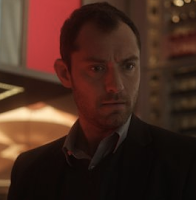 When Emily is facing a likely acquittal of murder on the NGRI (Not Guilty by Reason of Insanity) defense and Dr. Banks has come under fire personally and professionally for his treatment of her, he begins to have doubts as to her innocence.

It starts out as a slow-build and crafty psychological thriller and ends up as a strained neo-noir tale like something you’d see on an episode of Law and Order. It really didn’t deserve to be a movie to begin with.

“I don’t understand it. People are getting better.” says Martin’s mother after she gets a chance to speak with Emily. You might think it is a well-dramatized stab at corruption in the pharmaceutical industry, but that’s not the full story. If you think it might mostly be a one-note mystery where almost none of it’s accomplished cast of stars get to shine, you’d be right because that’s the other part of the story. Call it whatever you want, but don’t call it a movie worthy of the overwhelming praise this film has garnered since its release.

The performances offer not a single thing to dislike. Soderbergh’s storytelling skills – usually excellent – are here just not up to the task of making this drawn-out ordeal all that interesting, though its compelling start initially challenges this statement. But neither the charisma of Jude Law, nor the seasoned intensity from an old pro like Catherine Zeta-Jones will do much to help.

The problem is that the more we learn, the more we get that growing sense of implausibility where it feels like a forced mystery that seems to exist simply to emulate Hitchcock-ian prowess. But looking past that, the whole thing doesn’t seem as believable when we are expected to accept that doctors can be so easily put on the chopping block for patients committing crimes under the influence of drugs they prescribed. It doesn’t happen that way. Medicines make people do bad things all the time. Doctors are protected from that liability.

The story is hard to follow at a few intervals – partly because it delves deep into the human psyche, but partly because the odds of a patient finding a psychiatric expert to help a disturbed person stoop to this low of a level are remarkably rare. Its ending makes it less than climactic. Only two stars for the highly praised – but rather dull – Side Effects, one of the most overrated films of the year.