“Anna” (Rachel “Sexting in Suburbia” Delante) is a “book worm” sort of girl. She studies literature, and with the exception of a close-nit group of friends, crowds and parties do not interest her. Some might even call her boring.

Through an encounter with best friend “Donna” (Kerri Patterson), Anna is introduced to an old buddy of her brother’s (Jason Lane Fenton). The guy’s name is “Alex” (Tyler “What’s Your Number?” Peck). He’s an easygoing hipster-type.

It would be hard for Anna and Alex to have less in common. She is a studious, meditative, and generally pragmatic person. Alex is a no-strings-attached member of a struggling band that he doesn’t make much time for. His idea of living life is doing what he wants when he wants to. He has no serious goals. 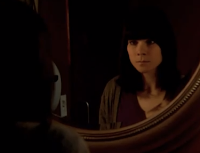 But with a lit-up cigarette in hand and a desire to meet the dark-haired beauty his eyes have locked onto, he now has at least one goal—that of winning Anna’s heart. The only problem is that Anna has a boyfriend, “Kevin” (Jon Miguel). They’ve been together for a good amount of time.

Jeopardizing everything between the couple, the new connection results in a fiercely passionate affair, one that will change both of their lives. Whatever Makes You Happy is a Drama/Romance that itself takes a shot at changing the rom-drama landscape in the world of independent film (and just maybe, beyond that).

In it, we are elated to have normal people having normal conversations that don’t feel forced or scripted (a rare enough quality in low-budget films). We can appreciate the performances of not just our two leads that “click” beautifully together, but their well-utilized supporting cast who help make an incredibly nuanced movie.

While more than a few segments bring out the need for some additional editing in the name of scene abbreviation (and some better lighting could have helped), about the biggest criticism to be had with the film would be the lack of any pressing plot drama over and above the soap opera-level dynamics we are presented with.

This leaves fine performances with characters that are never given the opportunity to really turn up the intensity. When we are hooked by it, we seldom feel threatened to be taken out of that drama “safe zone.” What we end up with is very good, but not quite great.

Sparing us big screen, cliché-ridden fluff like we are used to from Hollywood throwaway romances (like Nights in Rodanthe, Love Happens, and Message in a Bottle to name just a few), here we get a nicely focused examination of two lives, one that manages to not only make us care about them, but to want to feel what they feel. Convincing and passionate, one might well say that WMYH easily accomplishes what it set out to do.