Die Hard’s fifth installment is, shall we say, different from the four previous movies. Whereas we were able to brave the idiotic and preposterous plot logistics of Die Hard 4 in the name of “He’s John McClane, damnit!”, they’ll be no such grace going around this time.

Willis is back and in good enough shape for the disasters that we expect to follow him. Reprising her role as McClane’s daughter “Lucy” is Mary Elizabeth Winstead. Lucy’s brother “Jack” is played by the questionable choice of Australian actor Jai Courtney who provides us the reason for McClane Sr. being lunged back into action.

It’s been a number of years since John has spoken to Jack. Things have been ugly at home. Growing up, John was always at work, leaving his son alone. The result has been a lot of pint-up anger aimed at dad. These rough emotions are supposed to be at the center of the movie’s conflicts, but aren’t pulled off any better than the plot is, which centers around a corrupt Russian official.

This official, “Viktor Chagarin” (Sergei Kolesnikov), has chosen to unfairly try a political prisoner named “Yuri Komarov” (Sebastian Koch) after he refuses to hand over a secret document containing damning evidence against him. When John learns that his son has been imprisoned in Russia in a matter dealing directly with these events, he heads over to help him escape. But if we break it down, it doesn’t make a whole lot of sense—how did McClane think he could help his son by going to Moscow?

When John finds him, Jack is less than glad to see him (he pulls a gun on dear old dad he annoyingly keeps calling “John” for the whole duration of the film). As the danger in recovering the document continues to grow, we meet Yuri’s beautiful daughter (Yuliya Snigir). Soon thereafter, we end up in Chernobyl, to weapons-grade uranium, and then to bad guys double crossing each other as we’d expect.

But the bad guys are so unreal that they’re more like villains in a parody than anything else. It may be called Die Hard, but even the most “diehard” of Die Hard fans will agree unanimously that this one comes in way, way behind the other movies. I’ll go one step further and identify it as an early runner-up for worst movie of this (or just about any other) year.

What made the 1988 Die Hard such a classic was its reliance on an intelligent script, character development, great acting, a marvelous cast, a clever premise, charm, and a special (then untapped) place in the entertainment world at the time. Each successive film lowered the bar bit by bit. And then this mess arrives to set a new drop-off low. 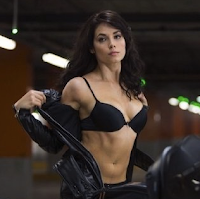 The way the plot is presented to us makes us not really want to know why or what is happening—until we see McClane. Surely there is hope then? Nope. Because all he really does is display an energy-draining posture and depressed frown for nearly half the movie. This is minus one funny cab scene when he gets to Russia and has a humorous exchange with a cab driver (Pasha D. Lychnikoff). This and one incredible car chase on the city streets with plenty of carnage and property damage are the only good things about this dump.

Die Hard is supposed to be witty, wishful, and exciting. This film is none of those. Though some have claimed to have heard it, I never heard McClane’s catchphrase: “Yippee ki-yay, motherfucker!” Dull characters, no sense of anticipation, horribly caricature-ish villains, and a weak story…yeesh! No one does so much as act as if they want to be filmed.

If the noise from metal crashing and bullets firing and our two heroes injuring themselves in minor ways from jumping into piles of who cares what don’t get to you, the lack of likeability will. It’s not Die Hard. It’s a dismal dud. It’s dead.