If you’ve seen Inglourious Basterds, you have just an itty-bitty taste of the bloodlust and gratuitous brutality to be found in his latest “make whitey pay for past wrongs” wet dream where nearly every stereotype of fat, stupid, bucktoothed, dirty, scraggily, bible-thumping, abusive, heartless, unenlightened, deep south redneck is laid on so thick that it’s like putting Kool-Aid in your mouth straight from the package.

When we first meet Django, we soon thereafter meet Dr. Schultz. From there, the fast-drawing bloodbath from shootouts and explosions begin—so also do occurrences of the word “nigger” and “nigga” more than 300 times for the duration of the film. Most would say “enough is enough,” but Tarantino will hear none of it.

When Django and Schultz form a trusted partnership and Django is found to be “a natural” at fast gun-slinging/killing, the two eventually locate Django’s wife, “Broomhilda von Schaft” (Kerry Washington) to arrange for her to be purchased. But they suspect that doing this might not be that simple. So Django and Schultz put together a ruse, but it will take worlds of self-control on the part of Django not to act too quickly as to give them away.

I don’t believe I have ever reviewed a film with anywhere near this long of a runtime that kept me so anxiously watching while almost not noticing the time fly by. Had anyone else attempted it, it would likely have been a failure, but Tarantino – insane though he may be – has a definite grasp of the artistic and a sizzling flare for constructing a film where the excesses of characters and their behaviors become the norm to go with a narrative that defies even itself. 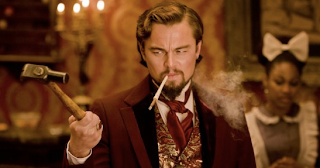 DiCaprio is “Calvin Candie,” a cruel southern plantation owner who loves to watch two big, black pieces of meat fight to the death in his living room. DiCaprio doesn’t totally fit the bill at first glance, but his character’s eccentric tastes and tendency to study Django and Schultz for several days before striking a deal gives Tarantino that much more time to blast us with his unimaginably dark presentation of how he thinks plantation owners behaved. Regardless, DiCaprio finally wins us.

Candie eloquently describes the hyper-submissiveness that comes from black brains compared to white brains while holding a dead slave’s skull as an example. Does this film allow for insertion of the fact that only 35 percent of all southern families owned slaves? No way. It would be out of place. After he is done with the lecture, Candie slams a hammer down on the table—because after all, he’s from the deep south, so he’s got to be mean, mean, mean!!!!!! 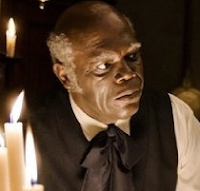 Samuel L. Jackson is “Stephen,” the leader of the slaves in Candie’s household, and as such, is just a white tool, a suspicious old man who is an extra set of white eyeballs looking out for trouble. And it isn’t until we are at Candie’s dining table that we hear from his mouth more of the same pushed-to-the-edge racial stuff that weighs down the whole work like profanity from the mouth of an off-duty sailor. When we heard Django express his enthusiasm for getting to shoot white people and getting paid for it, we thought that was enough—just get ready! Tarantino is psycho, which means he sees limits as green lights and blazes right past them.

Django is not for everyone. The movie’s capacity to anger, to make laugh, to horrify, and to satisfy on a staggering variety of levels are all boxes checked. The music choices are perfect. The performances are incredible, including Foxx’s who comes off like the black William Munny. But somehow, watching a half-blind slave who is no longer good for fighting beg for mercy and then be ripped apart by dogs is the straw that broke the camel’s back that makes this work a test to see how much we can stand.

Disassemble the plot and it is found to be more cathartic white-hating that – bearing with it for the sake of a good old tale of revenge (which I’m usually game for) – is still hard to appreciate since we’ve received so, so much of the same from Hollywood for so long. But revenge is timeless, like it or not. Again, it’s an exercise in how much you can tolerate. Tarantino is a sick genius, but a genius still.