Ex-cop “Billy Taggard” (Mark Wahlberg) has seen better days. He’s been doing private eye work since being bumped off of the police force after a controversial shooting seven years earlier. In the present, he has his struggling business with the help of a young and determined “Katy Bradshaw” (Alona Tal), but his girlfriend “Natalie Barrow” (Natalie Martinez) is who really keeps him going if anyone can be said to. And yet, his lack of any shared interests with her is something we notice before he does. 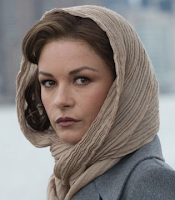 When asked by “Mayor Hostetler” (Russell Crowe) to find out whom his wife (Catherine Zeta-Jones) is sleeping with, Billy is anxious to collect on what seems an easy assignment. But when Billy finds himself in the crosshairs of a murder, the issues of the Mayor’s integrity and his future come into sharp focus. At the cost of his own wellbeing, Billy must decide how far he will go to uncover the truth in what is rightly called a broken city.

Allen “The Book of Eli” Hughes’ film has all the makings of classic noir. Its performers set aside the necessary devotion to make it work. And everyone does a fairly good job, including Jeffrey Wright as Commissioner Carl Fairbanks and Kyle Chandler as Paul Andrews, Cathleen Hostetler’s suspected lover. But Crowe’s Hostetler very lightly exhibits that he often has a harder time with bad guy roles than good guy roles.

Wahlberg, as usual, fosters that “fighting Irish kid” demeanor in another role his personality suits very well. His character’s complexity is strong enough to cause us to be drawn to him. His depth is more broad than most of his costars.

I liked Wahlberg’s temperamental determination and I liked the speed at which the story moves forward. The plot, although mundane, is built in such a way that it doesn’t play games with the audience or seek to manipulate our emotions. In hindsight, maybe that was part of the problem as the only big surprise is at the end.

The speed bump on the road to this movie’s (only marginal) success is its plainness. What it doesn’t have is any aspect of character or story that takes it out of the humdrum “corrupt city official needs to be brought down” theme.

That doesn’t hurt it much. It does, however, let us leave the theater feeling we have watched a completely average movie in every way, one that could have done way worse, but one that isn’t memorable enough to stay with us for long.