Flood Streets is about malcontents finding love, money, and marijuana in post-Katrina New Orleans. More specifically, it is about the struggles of a few to repopulate their city and resume the lives they knew before losing everything.

“Madeline” (Becky “City of Ember” Stark) is a real estate agent. Times have been understandably tough since no one has been on the market for houses. Her pleasure is weed, but her suppliers have run dry. When she meets her next one, it will bring on a crisis of conscience in her work.

“Matt” (Joseph Meissner) is the guy most can relate to. While he wants to play things straight, he has an eye for his dentist (Ava Santana). His girlfriend “Liz” (Melissa Hall) wants to play the drums, but she’s not that good at them, and she has no confidence in her own artwork which she happens to be rather good at.

Nobody is happy with the way things are, especially not “Georgia” (Asia Rainey), a single mom with a daughter (Rachel Dupard). Like the rest of them, she is in want for more money. She is preparing to rip off the government in welfare benefits to get it. If there is a point at which it is ok to justify her actions by saying something like: “I have to do what I have to do!”, she feels she has reached that point.

It has been 15 months since the mandatory evacuations of Hurricane Katrina. Dilapidated houses and buildings or the remains thereof sit, tattered and tilted, on cracked foundations or in piles of debris. A few are coming back, trying to put their lives and businesses back together, but it’s a slow process.

In a city once teeming with music and festivities, it cannot but be that things will get going again. That’s what New Orleans is to be a symbol of. That’s what we humans do best. Like ants with their hill caved in, we rebuild and keep on going no matter what.

Krieger and Meissner’s vision for the film came from personal experience. It took three years to write the script, 25 days to shoot it, and 15 months to edit and produce it—and all on a budget that wouldn’t even pay for the catering at a mainline feature film. All but 2 of the 42-member cast were locals who shared in what the film sought to accomplish.

The music is as alive as anything, a spiriting influence of ethnically suited and appropriately chosen local bands, all of them tasteful additions. The scenery and choreography exhibit a talent for filmmaking and with regard to the liberal demographic of the city, it's the best there is.

Flood Streets is proverbially flooded with admirable performances, even with the intensely dramatic portrayals that occasionally overshoot their targets when trying to show us a plaguing cognitive dissonance. But unlike most independent works where a tight budget is something we are often reminded of, we are here instead wondering how (and if) the plot is ever going to develop into something more traditionally movie-worthy. The film disappoints in this regard. 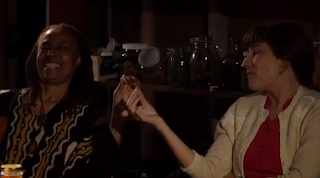 Even at its under 2-hour runtime, the plot structure is that of a soap opera, never really climaxing or giving us any sense of closure. Lacking focus or a much-needed sense of urgency, the story has a hard time rising to expectations, leaving us feeling a bit underwhelmed.

The movie has a little trouble advancing its story because what we are given is a wide, broad narrative that called for more peaks and valleys, not the smooth summary landscape of a single movie; as richly devoted to counterculture values and expressions as it is, the film would have done better as an internet mini-series where the evolving lives of the characters and situations we spent so much time learning about could have been given the necessary room to grow into something more provocative.