“Dewey Winstead” (Derek Haugen) is a loser, the kind most feel better for hating. And you almost can’t blame them since his passion is fishing using electrified pickles as bait. The bait works in the sense that it kills all the fish that swim around it and they float lifelessly to the top of the water. You can then catch them if you want to.

His competition and sworn enemy since childhood is the more successful “Jimmy Valentine” (Tim Whittet). Jimmy has a lot of money, drives a nice car, the women fawn all over him, and even the bait he sells is better than Dewey’s. Suffering from the disappointment of perpetually coming in last, Dewey decides to enter Valentine’s fishing competition to win the grand prize of $10,000, but the entrance fee is $200—which is $200 more than Dewey has to his name.

Not surprisingly, Dewey lives in a trailer park with “Mama Bear” (John Samaha). Normally, momma would be able to baby-sit for her sister (Theresa Marie Lynch) who tyrannically runs the local assisted living center, but mamma isn’t available. Swallowing his pride, Dewey volunteers for the job at the rate of $200 for two days to cover the competition entrance fee. But once he has met the cantankerous crew, he begins to have second thoughts as to whether it’s worth it.

Assisted Fishing is a Caddyshack-styled comedy, but it shouldn’t be confused with anything other than straight-to-DVD material. “Bernie” (Paul James Saunders) sharts (shart – a combination of fart and shit) out gaseous clouds of green-colored toxic butt fumes as if in some flatulence-prone movie aimed at making first-graders laugh. Everything from the retorts to the facial expressions in scene after scene of torturously awkward and embarrassing behavior is par for the course.

We must not forget that there are those (seemingly brain-damaged) individuals who actually find intelligence-insulting slapstick and vulgar iguana-on-Viagra jokes funny. If you’re young enough, old enough, or you’ve been hit over the head hard enough, anything is possible. Having emphasized that point, it should also be stated that some of the humor is genuinely funny and even clever. And as a plus, the film has the sensitivity not to denigrate or disrespect senior citizens while making sport of them. 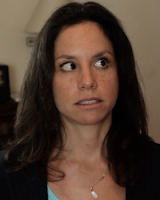 Director Joe “American Pie” Crouch has become known as a behind-the-scenes mechanical talent for various films. He takes himself up a notch here in his first directorial work. I say “up” as opposed to “down” because his story, though predictable and bargain-bin in quality, is an actually decent example of a creator knowing what he wants in the personas he brings to life on screen. If you can avoid the unthinkably painful cheesiness of the film’s first 45 minutes, there is the prospect of a meaningful – and perhaps to some small degree, memorable – story that handles issues like love, friendship, and moral values very thoughtfully.

By the end, we feel like we might just miss these characters. It could even be said that the cast brings us some unexpected talent, like Samaha who plays big momma (who we could have seen more of), and “Willie.” Haugen could become a well-known name, as could his potential love interest “Monica” (Allyson Sereboff). But not to be forgotten is “Henry” (Arian Godthaab) who is the most lovable and magnetic presence in this movie.

Like Dewey, some flicks it just feels good to hate on. This is one of them, but it doesn’t settle for staying that way. You might be surprised. I was.