A girl travels to Texas to collect on an inheritance when just a day earlier she had no idea about it. She learns that a grandmother has just died that she didn't even know she had, which kinda makes mom and dad jerks for not telling her she was adopted all these years. With the edginess at home, we can practically feel the road trip to Texas coming on.

And the road trip is on. "Heather Miller" (Alexandra Daddario) and her boyfriend (Trey Songz) and best friend (Tania Raymonde) head to Newt, TX where some paperwork is signed. Mrs. Miller now owns a friggin mansion and other assets. But these assets come at a cost; namely, an encounter with a chainsaw-wielding killer. 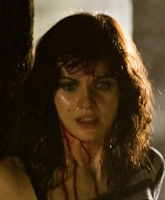 With the town's dirty secret getting out and the city authorities not knowing how to handle the threat of a next-generation bloodbath, our story is a nasty one indeed. But let’s stop and consider that we live in a generation that looks back with envy on the 70s and 80s and uncreatively tries to cash-grab on the revamping of old greats. This couldn’t be truer than with horror sequels.

There are some truly skin-crawling scenes and a respectable amount of the red stuff, but also some surprises to go with that allow us to view old Leatherface in a new light. But don't get your hopes up yet.

By way of stomach-turning intensity, this one about matches the 2003 film, although neither come near the 1974 classic in all of its psychotically displaced glory. The gruesomeness is respectable with several "defacing" scenes, including one where "Jed" (our new Leatherface, Dan Yeager) stitches a new skin mask through the insides of his mouth with disturbingly light grunts of pain.

But if anything, what nearly qualifies as painful are some of the performances, none of which are very good and many of which are definitely distracting (but not bad enough to kill, unlike our infamous villain). What is bad enough to kill is the film’s dialog that needed to be buried from the start without question. 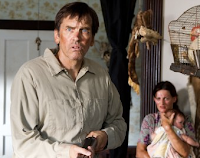 Director John Luessenhop knew he wasn't going to rival the first film. It was enough that he just put his own spin on it, and in the process, add some dimension to the man at the center of the horror. I’m down with that, sorta. The result is a movie that falls somewhat below its goal of being a fright-inducer, but not all horror buffs or movie goodtimers will be so willing to write it off that quickly, especially with talent like Alexandra "Hall Pass" (2011) Daddario. She may not be ready for the A-list, but her piercing gaze and pliable charisma adds to this project. Her co-stars didn’t hurt things, either.

It’s not really all that unwelcome, even the hodgepodge-ly simplistic characterizations of a small Texas town. The package fits expectations. And if you don't have that high of expectations going in, Texas Chainsaw 3D may just surprise you, even as we are listening to "God will fuck you up if you don't obey him!" music when Heather and the group arrive in Texas.

As stated, there is a story here and when we can overlook the film's smattering of shortcomings and put ourselves in the headspace of our lead and ask ourselves: "What would we do?", we start to want to like it a bit more by the end. And it does possess at least a touch of what we remember the 1974 classic having as we watch a deranged man chase his victims to carve them up in the dying light of day.