Spielberg’s Lincoln draws much of its focus from a book by historian (and film consultant) Doris Kearns Goodwin entitled Team of Rivals: The Political Genius of Abraham Lincoln, and in a nearly three-hour timespan (and with the help of screenplay writer Tony Kushner), it stays on a path determined to let the perceived aura of Abraham Lincoln shine through. 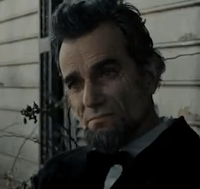 Even when it is the nature of truth and history that what we grew up hearing in school about our most loved historical figures may not always turn out to be true, the film dedicated to our 16th president is plenty concerned with that. It does, however, seem even more concerned with not letting any visible blemish undermine its story, least of all the physical details.

If anything, the story is so well rooted in authenticity that the feel of Daniel Day-Lewis as Lincoln alongside wife Mary Todd (Sally Field) is...astonishing. There simply aren’t any other words for it. And so is this true of the settings; the wallpaper, the teapots, everything in each room and scene matches what would have been found in locations of the time right down to the seat covers and floral patterns. Putting together the resources (not to mention the research) that this must have called for should be considered an untoppable accomplishment. Spielberg deserves the praise.

Day-Lewis’s Lincoln is a slightly imposing, tall man with a distinctive walk. His scratchy and high tenor voice and reliance on stories and rambly anecdotes gives not only an insight into the man himself, but into the time. His is the mind of a politician, a strategizer, a deep thinker who knows his limitations and what he is up against. As the film makes abundantly clear, he understands the meaning of compromise just as surely as he drifts off to consider Euclid’s Laws as a comparison to a truth in politics. 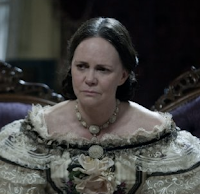 Mary Todd (who once was thought to be little more than overbearing and insane in the history books) is here a woman of great intelligence and grace, being a formidable presence to her and her husband’s critics—if also one who sometimes stumbles under the weight of her own emotional burdens (like any mother would who never fully got over losing their son William).

We open in January of 1865, in the 4th year of the Civil War on the lesser-known battlefield of Jenkins’ Ferry. When we first meet Lincoln, he is dodge-ily addressing some soldiers, but he does so with the prepped humor of a politician. Remember, Lincoln was a politician, not an ambitious anti-slavery revolutionary (which may or may not be something you learned correctly in school).

Lincoln’s goal: To pass the 13th Amendment to the Constitution, abolishing slavery once and for all. But the push to see the bill through is opposed by the leader of the democratic party, George Pendleton (Peter McRobbie). While this is happening, delegated Confederate officers are on their way to discuss conditions of peace to end the war. This becomes an obstacle when the choice becomes one of ending the war or slavery.

It’s a good thing Lincoln is not alone. At his side is former opponent and now Secretary of State William Seward (David Strathairn) and three hard-working lobbyists (James Spader, John Hawkes, and Tim Blake Nelson) whose comic relief efforts about equal the work their characters do in acquiring the necessary house votes. Going in, one might well go over the last four months of the Civil War to get a little more familiar with the ground the movie will be covering.

At the president’s side is also Thaddeus Stevens (Tommy Lee Jones), the rabid abolitionist advocate in the House of Representatives who is an oratory ball of fire. Jones sinks into the role like water finding its level. This small stretch of the president’s time in office that the movie presents was the most crucial. In that time, we learn more than we are prepared to learn about Lincoln—the president, the man, and the father.

Lincoln is not a documentary. It is an artist’s work. We must remember that when we come to the great divide between history and the story we are presented with, which should be expected to divert from a lifeless retelling of events from the past. While so much of the lengthy segments of dialog are based on verbatim quotes from letters and historical documents, liberties are taken for the sake of a dramatic story, and sometimes they fail while at other times they succeed.

In some ways, this movie about matters of the long-ago feels surprisingly modern. When Lincoln is addressing the black and white soldiers at the opening, the boys are quoting the Gettysburg address, and they wouldn’t be because the speech did not come to prominence until well into the next century. When Lincoln is pronounced dead, it is said of him: “He belongs to the ages now.” No such thing was said that we know of. And no, we have no record of him slapping his son Robert (Joseph Gordon-Levitt) for backtalk when he angrily demands to enlist.

And while (as stated) some of these dramatizations work and some do not, herein is the dividing line between the historian and the moviemaker. It is the artist’s job to entertain and inspire, not merely to inform or teach. But Lincoln is a history lesson that manages to arouse our interest in a subject we should reflect on and study. The vibrant and spirited debates on the house floor are the kind of thing the movie needs to help us get back to, but that is another thing probably altogether lost on this generation.

I was seldom bored in Lincoln. When I wasn’t putting together who was who in an attempt to remember back to history classes, I was digesting the peculiarity of the 20+ celebrities I kept recognizing throughout. The problem becomes that in a movie devoted to politics, it is sometimes a bit of a reach to constantly stimulate the audience. Lincoln does a better than fair job at this, but can’t quite shake that “one-note” ride.

There is no question that Lincoln is a remarkably well-written and superbly directed film with perhaps its greatest strength being its refusal to exalt the mythical Lincoln we grew to know as some revolutionist radical who just, by golly, wasn’t going to have slavery anymore. Lincoln wasn’t the great hero. He was criticized for allying with radical abolitionists to achieve his ends, and in that sense, was seen as almost dictatorial, but he knew he was just one cog in a big wheel—and one that wasn’t yet recognized at the time (at least not nearly as much as he is today).

When asked about contradictory statements made earlier in his presidency that brought into question his true love for freeing all slaves, he becomes uneasy. Lincoln was a resolute man, but still conflicted. He was, most of all, a pragmatic man. When speaking to Elizabeth Keckley (Gloria Reuben) about a free black future and even the possibility of a black vote one day, Lincoln gives an answer like any progressive from his time period. He doesn’t always inspire us with rosy talk.

Lincoln the (real) man isn’t always going to wow you with inspiration, despite the film’s halo it has others prematurely putting on him (biases from our time), and sometimes the interpersonal dynamics still fail to convey the sense of gravity from the political tensions of the time like they should. And there is the issue of black activists of the time not being given larger roles in the film (although Spielberg might reply that this was not what he wanted to focus on).

As it is, the movie takes us from after the Emancipation Proclamation, through the outlawing of slavery, but most of the fight to abolish slavery came from the black activists themselves. And yet, amazingly, Frederick Douglas had no part in this film, although his son is supposed to be sitting in the balcony when the votes are counted. William Slade (Stephen Henderson) just seems to be interested in taking the coats of the president’s guests when in reality he was an influential voice as a free black and active figure in the local Presbyterian church where slaves on the run were aided and a large helping of black soldiers and supporters rallied around the cause of freedom.

Lincoln had a lot on its plate and it accomplished what it wanted to with the occasional spillover. As impressed as I was with the movie, I would have trouble recommending it to all but the more astute viewers who have some active interest in the subject matter. But there is no question that the awards going out for this one will be well deserved.