Ang Lee's Life of Pi is an adaptation of the 2001 novel by Yann Martel, one of the writers for the film, wherein a spiritually searching Indian boy from Pondicherry is lost in the Pacific ocean with a fully grown Bengal tiger named Richard Parker.


When his family decides to uproot on the prospect of new work in Canada, the dissenting voice is that of "Pi Patel" (Suraj Sharma), a spiritually yearning kid whose interest in the religions of Hinduism, Christianity, and Islam lead him in and out of clarity on the meaning of life and its true purpose.

With the long trip to Canada through the sea at hand, it is here that the disaster on the open waters sets him on the journey of a lifetime. Recounting this journey as an adult (Irrfan Khan), Pi hands off the story to a writer (Rafe Spall) who expresses that he is looking for reasons to believe in God.

In the narrative, we meet up with Pi and his parents not long after he is trying to discover himself as a young child, as he tries to feed a tiger through the bars of a cage. Nearly losing his arm, his father (Adil Hussain) yanks him away: "A tiger does not think like a man. The emotions you see in him are your own emotions reflecting back at you." The object lesson from there is of making Pi watch as a tiger consumes a lama. A harsh lesson, but one that goes a long way.

Years later, we have Pi admitting that were it not for mom and dad's harshly pragmatic lessons, he would not have had the skills to survive. And indeed, many a wisdom-seeker will admit that the fear of God may be the beginning of knowledge (Proverbs 1:7), but it is certainly not the end.

Pi's parents are at odds with his "accept all" ways of thinking. They are more than a little taken aback by it. "You must choose a path!", they urge him. But young Pi has to experience more of the world before he can know what he believes -- and what he is capable of. 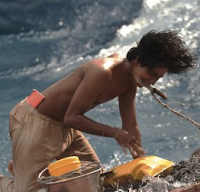 When stranded at sea in a lifeboat and few supplies, with a fierce and vicious tiger, Pi finds himself in the most uncertain of situations, but it is in this dire and seemingly hopeless situation that our story is given its power.

The amazing CGI work (almost undetectable if you went in not knowing that the tiger was fully a CGI creation) and message about finding hope makes this one of Ang Lee's best works and a well-done adaptation of an intricate novel. Only rarely do the dialog-heavy narrative and thickly visual embellishments make it seem as though any focus is lost.

Life of Pi certainly did not make me believe in God, but it had enough respect to not let itself get bogged down with the bloatware of religious dogma, but instead, let the conception of a higher power be its main consideration. What I loved most was its honest handling of the philosophical material behind it and the desire to speak wisdom to an audience of wonderers about what it meant to come out with just enough to survive -- only to then look back and ask the question: Was this for a reason?