Every once in a while, an average family movie slips past the execs and winds up on the big screen somehow. It doesn’t deserve to be there, but it’s there anyway. This is what happened with Frank Coraci and Kevin James' Here Comes the Boom, in which James plays "Scott Voss," a burnt-out high-school biology teacher who gets into MMA (mixed martial arts) to save his school's soon-to-be-cancelled music department due to lacking funds.


Kevin James and MMA? You heard correctly. What is wrong with that other than the fact that "Kevin James" and "MMA" are in the same sentence? Well, nothing but that, but such is the case in this not-all-that-funny film, starring himself and a devoted music teacher, "Marty Streb" (Henry Winkler), and a very sexy Salma Hayek as "Bella Flores," James' fellow teacher and love interest. 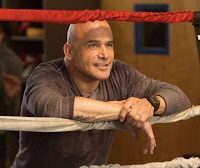 When every other avenue to raise the money turns up a dead end, MMA is his only option. But this 42-year-old, bummed-out teacher whose brother "Eric" (James' real-life cousin and comedian Gary Valentine) has a home-life from hell and who himself can't go a day without futilely trying to win the affections of Flores, doesn't have the training—not without the help of connected MMA fighter "Niko" (played by the legendary Bas Rutten) who puts him through the ringer on what he must painfully become in a “painfully” short time.

It's Kevin James with some (though not all) of his daily little frustrations from being just another guy who wants to succeed, as in most of what his movies and shows have tried to portray. But James doesn't give us the same goofy James here, nor does the presence of Valentine remind us of old episodes from The King of Queens. So that makes this a different animal.

It doesn't feel as Kevin James-ish. The silly slapstick, the oddball social lack of awareness, it seems to be mostly absent. And what is in its place? Comedic monotony, mostly, and a bunch of funny guys who have only their personalities to get and keep our attention when James is teaching citizenship classes for $8 an hour and trying with everyone else to help the school. 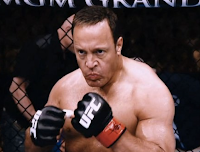 We are loaded down with an optimistic cast and a story that you can't help but care about, but not much more than that. And it’s never that hard to see where it’s all going. So to say that this project was mishandled would be fair. The thing is, this is still a hard-to-dislike film. And although it was brought to life in such a sappy way, it actually worked like some sweet Hallmark afternoon special (if that's your kind of thing).

A number of fighting big names have sizable parts in the film, including Rutten, Joe Rogan, Mark Dellagrotte, and others. And while it may be a bit of a stretch to watch Kevin James and be expected to take him seriously in anything to do with MMA, it's harder because he acts like he really wants us to take him seriously. But it is at least as hard to see him going after the affections of Hayek on screen in a feisty role that she totally owns. Indeed, very misguided, but also very hard to come out and openly dislike.