December 25, 2012
This year’s “Most Tasteless Horror Movie” award goes to the same movie that gets the “Most Non-scary Horror Movie” award, as well as any other awards of disdain I may pull out of my hat and feel the need to give. And yes, I am taking into account that we are talking here about a direct-to-DVD work rather than a big-budgeter.

The movie is an apocalyptic horror film based on the date 12/12/12, which is the birth date of Satan’s fleshly incarnation. Less than ten days later (12/21/12), a young antichrist child will be ready to step up and rule the world. It’s another “evil baby” movie, but it at least tries to go in a new direction.

At the movie’s start, we watch as an almost totally nude female is tied to an alter and is rubbed down with oil of some kind before having her stomach cut open.


From there, we go to meet a young couple, “Carlos” (Carl Donelson) and “Veronica” (Sara Malakul Lane) as they are together in the hospital with Veronica going through a very difficult labor. When it is done, their evil spawn has killed a doctor and a nurse. When they get “Sebastian” (aka “Satan”) home from the hospital, more deaths follow while a crazy doomsday Satanic cult practitioner named “Mahari” (Jesus Guevara) attempts to take Sebastian back to the lair where his Satan-worshipping followers are preparing to usher in his return.

With Veronica going half-crazy wondering why her scarily ugly baby can’t be normal and why she keeps ending up in the middle of murder investigations, she decides to go stay with her sister “Gabriella” (Laura Alexandra Ramos), but even there, the madness and murders continue--and with unintentionally laughable consequences.

At a fairly brief 85-minute runtime, this film has the decency to end quicker than most really bad movies (whose makers had no idea they were bad, of course), but it still wasn’t soon enough. We are put through the ringer of a story that, quite frankly, doesn’t make much sense. 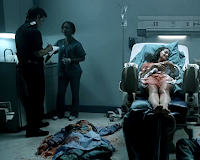 None of the details congeal; “Detective Barnes” (Steve “Hold Your Breath” Hanks, who happens to be by far the best actor here) is investigating the murders at the hospital and another at the couple’s home, but when Veronica decides to stay at her sister’s house 100 miles away, she contacts the same detective anytime some new catastrophe happens and he manages to get over to the house very quickly. And it is odd that even in another city he can call for backup and every cop knows him by name. Guess no one caught that little glitch in the rough draft.

The doomsday nut who is trying to get the baby has no way of knowing where Veronica’s sister’s house is, but he’s there right after she gets there in the morning. The cops don’t really act like cops, but no one in this film behaves like normal human beings, although everyone of them use “the f word” to make up for the fact that no one knows how to be taken seriously without it.

Our attractive star Veronica comes as close as can be expected to being likable and effective. The bare-breasted hottie who was sacrificed at the film’s opening wasn’t totally nude. For some reason, she was allowed panties and was tied in such a way that anyone could have squirmed out really easily had they wanted to. Just like with the pathetic effects behind Sebastian (whom we never get to see directly for very long), we get several close-ups of what is supposed to be Veronica’s vagina as she labors to pass Sebastian in birth. Yet another unconvincing low point in the film.

Little Satan is not just evil, but gross, and that is what gets me. He stares at naked women, and at one point, apparently tries to eat his mother out. He doesn’t mind staying covered in excrement and blood, but more importantly, has interesting ways of killing people, and this is when the eye-rolling gives way to head-shaking from the innate stupidity of this project. The evil little guy leaps up like some CareBear and latches onto people’s necks and sucks out their blood. No one can seem to stop him, but he has other ways of killing—like taking over someone’s mind and making them jump off a cliff, making a guy take an exacto knife to his own throat, or (most comically) making a woman stand over a sink full of water and dip her face in it until she collapses from drowning (wouldn’t she just fall down and start breathing again??)

When phone calls are made, no one ever waits for the phone to start ringing and everyone picks up before the first ring. So they just pick the phone up and start talking to whomever it is they want to talk to. It’s a horror movie, but we have no interest at all in seeing anyone live. We’d rather they die.

Complete with commentary on the Mayan calendar and the expected drivel about the end of the world, you pretty much know going in that the odds were never good on this turning out to be anything of interest. It’s like The Omen (1976) and Rosemary’s Baby (1968), but is its own nicely paced and shot example of a terribly executed movie. D-