A girl is walking down a road. She gets splashed with a milkshake tossed out of a truck window by some rednecks who laughingly drive off. Grossed out and pissed off, milkshake girl calls her sister-in-law to come and pick her up.

When they are back home and milkshake girl has cleaned up, dear sweet sister-in-law has decided to give them each a reward in the form of mystery pills she got from a co-worker that have been promised to put them “in orbit.” Seems like a sweet compensation for her having endured a crappy day.

In comes the husband, “Brian” (Jared Stern). Since they are now both high in distinct ways from the two different pills they each selected to take, Brian must watch them and keep them out of trouble. Comedic hilarity ensues.

Well, it may not be hilarity, but some of it – despite a trailer that doesn't exactly inspire us to see it – is somewhat funny. That's what Wild Girl Waltz is all about—really, that is all, but honestly, I should restate how the movie itself is better than the trailer makes it out to be (which is really bad).

If movies like The Hangover and the even better Hangover II or indie films like the very funny and outrageous Heavy Times taught us anything, it is that the assertion of "watching others get wasted is no fun if you're sober" is NOT always true. A movie can entertain while doing just that. This film just doesn't qualify as a stellar success in that regard.

The title sounds like some cheap spin-off of Girls Gone Wild, and you almost wish it were. But this one is instead an endearing film about two high-as-kites gals being looked after by a nice guy who has reason to care for both of them. In its own right, it is a sweet and aspiring comedy with its two charismatic leads, “Angie” (aka “milkshake girl,” Christina Shipp) and her sister-in-law “Tara” (Samantha Steinmetz), both covering some incredible ground towards making us like them and the movie.

With artful scenery of the small town they live in and some very fitting music choices, director Mark “Baystate Blues” Lewis shows that he has a good feel for character development—and might I add, it is damn nice to find new directors who realize that a movie need not sink to the level of corrupt cops and gruff, gun-wielding vigilantes in New York to have appeal.

While we are reminded in a plethora of ways that this is indeed an indie film – and that a certain male cast member could use some acting lessons above anyone else – the genuine class of its two lead girls goes a long way towards winning us over.

Of all places, there is even some philosophy here. The best part is perhaps when Brian remarks to a bartender: “Ever have a moment you know you'll remember for the rest of your life?” It is the little silly things that our minds tend to hold onto, and this film takes a non-movie-worthy concept and makes it into a movie anyway.

But that has its good and bad; it deserves a nod for creativity's sake, but what can't be forgiven is the film's lack of high enough stakes or sufficient antagonistic drive. It is one of the first rules of screenwriting that any film must possess sufficient conflict to float itself. There must be something to gain and something to lose. Beyond a man owing Jared some money and the milkshake-throwing rednecks, we get none here. 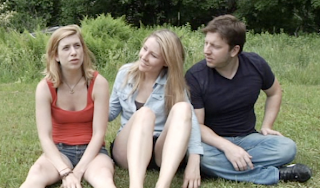 And that – and only that – is where Wild Girl Waltz falls short. There is no payoff, no redemption, nothing that leaves us with more than what we went in with, which is a shame, considering that when the film ends, we feel like we know them well enough to have gone to school with them. This isn't movie-worthy material, but I can't help but feel that down the line, the stars will have this on their resumes as a sort of “teeth cutter.”