In Dust Up, a former soldier who has come to terms with his peaceful side comes to the aid of a mother and her baby girl when a cannibalistic drug-lord/cult leader comes after them. If it sounds crazy, that's because it is. The setting is the desert and it sounds and feels like some apocalyptic western thriller, but it is an action/comedy that is unlike anything you've seen.

How can I best describe Dust Up? Let's try: A dirty, demented action/comedy - sometimes stupid, and even more often, ghastly - but one that is always funny, well-defined, unexpected, and clever. And that is only a summary. It still doesn't do it justice. 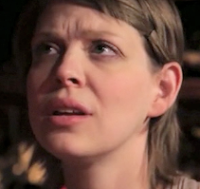 We meet our quietly confident, eye-patch-wearing man of few words, "Jack" (Aaron Gaffey), with his best friend "Mo" (Devin Barry). Both of them live in the desert. Jack often reflects back in regret to his days in the war when he was a killing tool for the US government. Mo is a hipster Native American who lives in a teepee, having grown tired of inappreciably counting Casino money.

When Jack is called out by "Ella" (Amber "Buffy the Vampire Slayer" Benson) to fix a broken pipe, he soon thereafter meets her meth-addicted loser of a husband, "Herman" (Travis Betz) who is wanted by drug-crazed sex maniac and de facto cult leader "Buzz" (Jeremiah Birkett) for a sizable debt. When Jack and Mo get involved to help buy Herman more time to repay it, things go from nutty to perversely insane. How insane?

Well, let's just say it is the beauty of indie films where even the most twisted of visions can come to life to serve as vessels to carry on a new wave of self-expression. To be more to the point: a crazy black man who is not above sodomizing his victims while they are alive brings out a murdered sheriff and incites a crowd to cannibalize him--while carrying a young baby on his chest! 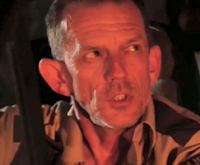 This is why Dust Up will be too much for many viewers, but it does not rely on exploitation as some kind of crutch. The abundant blood and guts on display, the compound fractures, a woman being impaled and spitting up drugs and chewed food (and her junkie husband coming over and consuming what remains of it), and many other such things are part of the repulsion, but not all of it. It's that there is a baby involved, and that baby spends nearly a third of the movie being cared for by hygienically-challenged cannibals whose leader believes the economy is about to collapse. If Dust Up doesn't make you squirm, you may need serious mental help.

I guess the real reason this proves so stimulating (enough to want to reach over and grab the person sitting next to you) is because the whole thing feels like a grand escape into absurdity that blasts our sensitivities while serving as a bizarre comedy that passively lends itself as an unflattering critique of humanity. And when we are called out, we respect what calls us out all the more, as we do everyone we meet in this story; from "Tammy" (Galicia Vaca Lopez) to "Shakes" (Christian Badami) to the perplexing anomaly that is "Mr. Lizard" (Al Burke).

Every one of these characters are the icing on the cake of superb crafting--so much so that we never for a moment find ourselves wondering how any one of this unruly crew would think or act in a situation. The dialog itself is a perfect reflection of the overall quality of writing that stands behind the finished product.

Much more could be said, but no words can take the place of actually seeing the movie (which you might very well should...if you think you can take it). The spacey and sometimes ridiculous humor is a jewel that becomes endearing once we get used to the way the film goes about entertaining us, which doesn't take all that long.

The restrained chemistry of Benson and Gaffey is always present. They were meant for their parts. But the "get under your skin" player here is Birkett. His riotous release of lawless energy and always-on-the-prowl perversion make him an animal, an out-in-the-open predator, a leader to be feared. I was totally taken by him. He's Wesley Snipes (from Demolition Man) + Martin Lawrence + heck, a bunch of other nutcases.

It's not often that an action/comedy with such fringe-reaching appeal can speak to different emotions the way this film does. When the show is over, we are ready and hoping for a sequel. No doubt about it--Dust Up has cult classic branded onto its forehead!