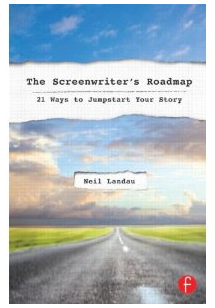 The Screenwriter’s Roadmap: 21 Ways to Jumpstart Your Story is the latest work from author Neil Landau (who gave us 101 Things I Learned in Film School) whose television credits include Don’t Tell Mom the Babysitter’s Dead, Melrose Place, and MTV’s Undressed, among others.

As professor of Screenwriting Programs at UCLA School of Film and USC School of Cinematic Arts, he shares with us his insights in a lengthy book that does more than just showcase some tips on how to overcome the occasional mental block when mapping out a new story.

Landau’s tone is one that is to be expected, one of a sagely teacher writing in a common speaking voice with the intent to lay the foundation for writing a good script. His intended audience may just be up-and-coming writers, but any devoted film fan could stand right up and use this to teach a class on making an appealing movie.

The Screenwriter’s Roadmap (TSR) consists of 295 pages, spanning 21 chapters, all of them devoted to the creation of nuanced stories and characters of depth. Each chapter is a nuts-and-bolts look at the how-to of screenwriting with special emphasis on the components that will make or break a script, and each of those chapters is ended with an interview with a famous director or writer that inculcates the material that has been covered. Some big names, including those of David Koepp, Tony Gilroy, and Stuart Beattie lend us their insights in Q&A exchanges that run the gamut over discussions on a good number of renowned films.

It is Landau’s feel that comes with his experience that has enabled him to provide us with an in-depth look into everything—from the cosmetics down to the structural support of a great screenplay. Consider his admonition from Chapter Two, “Why Are We Here?”…

“True stories and anecdotes are almost always better than stuff you make up. Novice writers often mistakenly map out a screenplay first and then research the details. Fueling your imagination with the necessary background knowledge can help make you a stronger, more confident storyteller. If your protagonist is a chef, read autobiographies of famous chefs; study cookbooks; eat at suitable restaurants and ask for a tour of the kitchen. Better yet— interview the chef, the maître d’, and the wait staff.” (p. 14)

We get truckloads of information on those often overlooked seedling considerations of building our story with serene details that can only come with an intimate knowledge of the settings and the time period. Or consider this bit in Chapter Eight, “What is the Structural Blueprint?” about building conflict...

“Determine the best structure for maintaining tension and suspense for your story. Always begin the story as late as possible. Introduce a desperate protagonist and we’re immediately drawn in. Find the structure that involves us in the protagonist’s problems from page 1. Why should an audience wait for the good stuff to kick in?” (p. 123)

Landau’s remarkably clear and well-divided organization of the book is what makes it not only a very easy read, but also one that takes us progressively deeper into developing a story, as well as our confidence in it.

“Great movies are about the collision between desperation and passion: something to gain and something of value to lose. Therein lies the dramatic ﬁre in your story.” (p. 267)

In an interview with Susannah “The Soloist” Grant (which, along with the interview with Steven Conrad, is one of the better interviews in the book, in this writer’s opinion), Landau shares this gem...

“Basically, the only absolute I tell my students is that the goal of a well-structured screenplay is that the structure is invisible.” (p. 81)

“A satisfying ending feels inevitable without being predictable; there’s a big difference. A thoroughly predictable ending is a disappointment because it lacks surprise—and surprise is the lifeblood of your screenplay. Even if the audience can predict the ultimate outcome, be sure to throw in some interference so the audience can’t predict how you’ll get there.” (p 218)

And it is precisely because of its wealth of information that TSR is a fairly long read. This is due to the interviews at the conclusion of each chapter, many of which go into plainly excessive detail on not one or a few, but usually a number of different movies. While trying to glean directorial insights behind some films we enjoyed, we find our eyes starting to gloss over an abundant amount of material that could well have been trimmed down—or perhaps better yet, saved for a more theme-specific project about or concerning those movies and/or their creators. But an issue of too much information-rich content in the interviews is still just barely an issue worth mentioning—and this may well be more of a consideration that varies from reader to reader.

My biggest gripe with TSR is its gratuitous repetition of references and examples from some of the same films. Erin Brochovich, The Hurt Locker, Rise of the Planet of the Apes, and Little Miss Sunshine (among others) we visit and revisit in example after example, with long segments of dissection (wherein the same material is discussed). This becomes tedious and begins to erode our interest somewhat.

In the finality, TSR is about mainly one thing: getting a script before publishers and execs. On that level, it passes and then some. And while I believe more space could have been explored to provide us with actual samples of submitted scripts for the newest or newbies, enough groundwork is done to cover the basics, making it an ideal source on screenwriting. Indeed, this might well be considered required reading for the serious film student. A-