With a tagline like “Face your past, fight your future,” it isn’t hard to anticipate the type of film we have before us. When the viewing experience gets underway, it takes only 10 short minutes to realize that what we have in Looper is another bad take on Time Cop + Terminator, a sort of sick amalgamation that is destined to fail by its own hand. 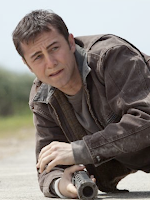 To start, we meet “Joe” (Joseph Gordon-Levitt) and get to watch him work. Joe is a Looper, a time-traveling assassin from the year 2044 who is responsible for murdering and getting rid of the bodies of anyone sent back in time to die by order of the mob (since it is too hard – their words, “virtually impossible,” huh? – to dispose of a body in the future).

Even as a killer and an addict, Joe makes a very good living working for mob boss “Abe” (Jeff Daniels), but falls out of his good graces when his future self (Bruce Willis) is sent back to die and he fails to kill him.

Oh, yeah, and this is where things begin to get really ridiculous: It never makes sense why the mob bosses send back their assassin’s older selves to be killed by their younger selves still employed by them. But also, if the crime-lords want to wrap up loose ends, why would the same person be expected to finish off themselves when other assassins would be better suited for the task? These are just a few of the bizarre questions that this fractured film leaves behind. 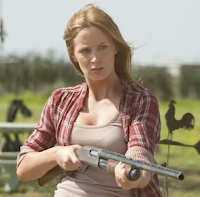 When Joe is hunted by “Kid Blue” (Noah Segan) and others from the mob, he hides out at the farm of “Sara” (Emily Blunt) and her son “Cid” (Pierce Gagnon) after running into his future self who has come back to erase some mistakes which resulted in his being sent back to die and got his future wife (Qing Xu) killed.

And here is where the film takes an even bigger departure from its own story. We could nearly have worked with what we had up to now (with a few good changes, of course), but that all goes out the window when we get to meet little Cid.

Cid, along with many people in the film, have some levitation gene (a gene that one day just showed up in the gene pool) that enables them to be post-apocalyptic street junkies and impress passerbys with the ability to levitate coins. So far as we can tell, that’s all anyone ever does with this ability in the film—levitate coins.

But young Cid is like a prodigy with genetic X-Men-level abilities and reminds us a lot of that kid on Twilight Zone who can wish people away. He can cause massive shock waves that travel hundreds of yards, knock over cars, rip apart bodies, or tear apart a house. So now is the time to wave bye-bye to the film’s focus because the last chunk of it is about this kid, and not so much anything else. We have what should have been two separate films in Looper.

I found Looper to be emotionally manipulative and depressing. Its needlessly cruel characters seem cold and hollow. Scarcely does a ray of light creep in to lessen the calloused demeanors and personalities or to allow the dimensionally narrow ambitions of everyone on screen to seem not so boxed into what feels like rough-draft writing of a horror/psychological thriller, blanketed in a cheap sci-fi that is largely disconnected from reality.

For a film with nearly no focus at all, we can rightly expect there to be pacing problems. And though pacing is not its worst attribute, when we get done with the story in its spliced-up, layered sequences, we are left with really very little to like. In its many attempts to sell the genuineness of its different characters, not a single cord of humanity ever successfully resonates outward.

When it does finally get close to satisfying, we realize we got next to nothing out of it at all. Gordon-Levitt and Willis weren’t that good of choices for past and future versions of each other, but the real kicker: In a movie about illegal time travel, how is it only ever utilized to dispose of bodies? What a fucking waste! No exploration, no curiosity, no attempting to live in another time – just disposing of bodies – and that is just like this film: shallow and ridiculous!