As ordinary as its title sounds, so is the movie. The House at the End of the Street is about newly divorced mother “Sarah” (Elisabeth Shue) and high school-aged daughter “Elissa” (Jennifer “Katniss Everdeen” Lawrence) who move to a new neighborhood to begin a new chapter in their lives.

The house they pick out is beautiful, but it is only affordable to them because the house at the end of the street had in it a double murder four years earlier and property values have suffered as a result. When Sarah and Elissa are settled in and get to meet their new neighbors, the talk is of offering to buy the house from the sole-surviving son of the two deceased parents and make it into a public park. The subject is the core of their endless chatter. 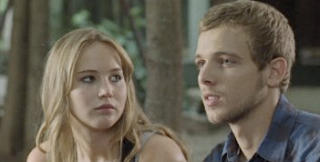 The son, “Ryan Jacobson” (Max Thieriot) is a quiet kid and it seems all the townsfolk talk about is his weird and withdrawn behavior, but the urban legend at Elissa’s new school is that one lone survivor still lives out in the woods just behind the scene of the murders! With Sarah’s new job at the local hospital and Elissa’s pursuit of fitting in at a new school, the course of events will put them both in line to make a terrible discovery, and it concerns their young neighbor who lives alone in that great big house.

You could have replaced the title “house at the end of the street” (HATEOTS) with “house around the corner” or any campy-sounding descriptive title and it wouldn’t change the fact that the movie is less about a house than it is the person who lives in it. But the problems with HATEOTS are in the way it is constructed. Everyone, even Lawrence and Shue, seem to talk like cast members who just met on set before filming. Jennifer Lawrence’s livening passion can’t knock this down even when she starts to really own the performance by the final chapter. 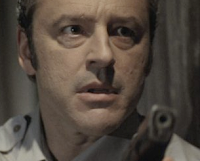 And why is it that everyone seems locked into their roles of being nothing more than fill-in parts in a horror flick? Things are kicked off to such a dramatic start where the new house is declared in so many words to be “a new start.” No way that could go wrong now, could it?

The neighbors, they share the legends of the murders and a murderer still in the woods and the young Elissa takes an unusually obsessive interest in whether or not they could be true—all too familiar horror movie territory for sure and more would have to be done to raise the bar.

Thieriot is just right for his part, but Lawrence is too mature for hers, and so is her new best friend “Jillian” (Allie MacDonald). The broodingly slow romance between Elissa and Ryan teases at holding our interest when the deteriorating relationship between Elissa and her slightly neurotic and overprotective mother feels like it matters more.

The film has lots of tension, but no real scares. It’s a one-note horror that never takes full advantage of what it has going for it—a firm grip on the details and a nice use of its environment. And it’s never good when the director of a story feels like nearly everything has to be explained to the audience, even right through the credits. But we expect this kind of Halloween drek this time of year.