In 1984, a young Tim Burton set out to create a 30-minute short film in black and white. It was called Frankenweenie and he did so to pay homage to James Whale’s 1935 classic, The Bride of Frankenstein, a continuation of the original 1931 film Frankenstein. The result: an effective family comedy that did what it was suppose to do in its limited confines.

In 2012, the now-seasoned pro director gives us a recreation of his earlier work in 3D, and again in black and white, and in very good (perhaps the best) stop-motion animation around. Set in the 1950s, the artistic aim is never missing, but nothing is really as standout-ish as the film’s doing two things; 1) Manipulating us emotionally with the pain of losing an animal, and 2) Giving us some clever humor (some of which is actually really, really good) to lighten the mood and make us forget about said manipulation.

Being put through the same paces as before, we meet “Victor Frankenstein” (Charlie Tahan) and his dog “Sparky.” The two are inseparable, but Sparky also happens to be the only friend he has. Victor is a smart boy, but doesn’t get out enough. Shortly after he is compelled into a compromise with dad, “Mr. Frankenstein” (Martin Short) to play baseball in return for being allowed to compete in the school science fair, a car accident claims the life of his best friend.

Inconsolable and broken inside Victor may be, but he can never bring himself to give up hope. And as it turns out, there is one other influential person in his life, his intimidating but informative science teacher, “Mr. Rzykruski” (Martin Landau, one of the few characters in this blotchy presentation that actually makes you want to remember them). When he learns in class about how a dead frog can be made to move with electrical current, he rigs his upstairs attic to channel lightening to reanimate his canine companion. When his plan works and his dog has returned from the dead, it then becomes his responsibility to hide his best friend from everyone.

Things aren’t like before, though. No more walks or games or giving Victor a hero’s welcome when he gets home. Now he has to keep Sparky quiet so as not to get attention from his parents, or his suspicious and ornery neighbor (Dee Bradley Baker) and a very backwards community that views science as a great evil. 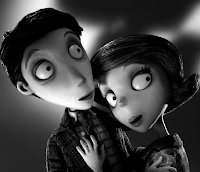 Quite strangely, scientists in Victor’s universe know about the effect of lightning on bodies, but no one has ever been able to duplicate the success of a young boy in his attic until he, and later a bunch of kids copying him, try it. In order to appreciate a departure from reality, even the most surreal comedies must have some basis in fact, and yet this whole film is riddled with odd peculiarities that, in small ways, detract from it (while it keeps working our mood over with heavy doses of powerful and reflective music).

Sparky was hit by a car and he died of his injuries, and yet all someone had to do was administer an electrical shock and he could keep living and running around like nothing ever happened. Heck, EMTs with shock paddles could have saved him then. And Sparky is a weird dog; he understands and obeys commands not to whimper while other dogs are so much more unruly. He can hold in his excitement like a human. He also runs out of the house when he gets scared and wanders to a graveyard and downtown—and he reads his name on a tombstone and contemplates the meaning of his own death! Making our animals more like us, I guess, is the new way to narcissistically remind ourselves of how great and deserving we are as a race.

Victor’s parents must be close to deaf. They can’t hear a dog whimpering and barking upstairs, even a dog they lived with. And when they do find out he is alive, it doesn’t the least bit interest them HOW it happened! And of course, it never occurs to anyone else in the film why they don’t just electrically zap humans to bring them back—another reason this was not a good movie choice. 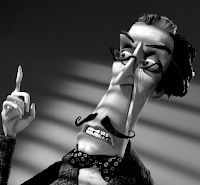 But Burton figures, it’s time to play on our animal sympathies at Halloween time, being careful to throw in as much Halloween stuff as he can with some intelligent humor and maybe some viewers will forget about everything else that is wrong with the picture, like the antagonists. They are as out of place as everything else.

The Frankenweenie equivalent of bullies, led by a kid named “Toshiaki” (James Hiroyuki Liao) with a stooge fat kid (Robert Capron) and a hunchback creeper with bad teeth (Atticus Shaffer), don’t beat kids up. They want to beat out smart young Victor and have the best science project! And once they find out that Victor is onto something, the stage is set for the town becoming overrun with monsters.

And I learned a few things from watching Frankenweenie. For instance, did you know that if a cat bites a bat and gets struck with lightning at the same time, the combo will merge into a hellish vampire feline and attack everything and everyone? I sure didn’t know that. If you shock your hellish creations again or feed them salt, you can change them back to their normal selves—all except for the cat/bat combo for some reason. Too bad for the cat and its owner. I guess this is a dog movie.

Burton’s latest fantasy splurge is just not the right stuff to let our imaginations go for. It can’t be called a creative use of film – certainly not for Burton – and short of a few ears and tails falling off, it doesn’t have that particularly twisted Burton feel. It’s kind of funny though; he tries to make a more positive movie and ends up making an uninspiring one. Even the pros should stick to what they are good at.

But what is much worse than all of this is that this film does a great disservice to all children. Victor is an emotional baby and the film helps him stay that way – and in effect, helps all kids watching stay that way – by teaching them that when you lose someone, there is no need to move on. Just bring them back! You never have to lose anything. Things will be just fine when you get everything you want. I bet the writers never thought about the message they were conveying, either.