The writer of Training Day (2001) and S.W.A.T (2003) brings us the police drama End of Watch. It follows LAPD officers “Brian Taylor” (Jake Gyllenhaal) and “Mike Zavala” (Michael Peña) on patrol in the absolute worst neighborhoods of South Los Angeles. A proud and ambitious opening leads into a long get-to-know of the two and the cops they proudly serve with, along with their superiors and other figures spanning the departments. 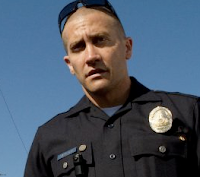 They are not all friends. They don’t all get along, but when you rely on each other to watch each other’s backs, you put aside the bones you have to pick and remember that you are on the same team. The cops are one team; the drug cartels and constantly warring street gangs are the other. Things like drug and human trafficking are to these men a daily occurrence.

And in a movie such as this, the interpersonal dynamics seem spot-on. “If you stay in line, I will back you. If you get out of line, I will personally throw you under the bus.” their captain tells them before sending them out on another day’s tour. “Take pride in what you do,” he adds.

As we follow Taylor and Zavala over the course of several weeks or months on and off the job, we meet Taylor’s girlfriend (Anna Kendrick) and Zavala’s wife (Natalie Martinez). At this point, we almost feel like we know them. Their “small talk,” the lines they throw at each other in jest over the course of a day we feel like we could reply to as if they were our running buddies. Their behavior shows us how comfortable they are policing a turf most of us would be afraid to even drive across on any given day in broad daylight. They know the area, the people, the big players, and the wannabes and small-timers.

And we would enjoy it a lot more if only we felt that what we were watching was more grounded in reality rather than served up to maximize drama in a fluffy Hollywood schematic. The film’s excesses are enough to consume its own sought-after sense of realism. 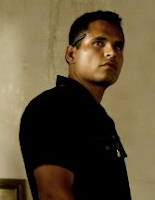 And while the “found-footage” take is fast becoming a dying breed, we still see it try to be made to work. The movie would have benefited from a standard shooting style as opposed to a constant switching between cameras, but unlike so many shameless “mockumentaries” out there, this one doesn’t play itself up by lying to us to tell us it is supposed to be real. It just wants to look that way. As a police drama, it should have been approached like any other film because many of the scenes we are treated to could not have been filmed by anyone around, or else not with audio (a common problem when working in the limitations of “found-footage”).

Still, it would not have been hard to forgive much or all of this in the name of extreme entertainment, but the more we get to know of the bad guys, the less we are compelled to relate to them or their good guy counterparts. When we meet the cartels, this gets worse. They use five times as much profanity as a parody of the old DEF Comedy Jam on HBO.

The “F word” is so often repeated in a single sentence that we nearly start to think it’s all a joke. If you had $5 for every word, you could make that month’s rent payment. I don’t know where certain directors get the idea that tough streets means overcompensating on the “tough” language, but directors can easily fall into this trap. The issue is such a problem that not a single viewer could fail to notice and be bothered by it here. 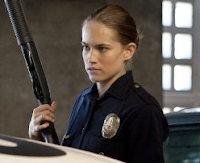 That the cartels and their henchmen are “evil” is another fact that can’t be ignored, nor can it be missed because Ayer worked hard to make sure of that. The result is over-the-top bad guys that push the envelope of credibility, so much so that we find ourselves smirking or sighing in unbelief. Were it not for these things, End of Watch would have been a remarkably kick-ass film.

It has many of the earmarks we remember from S.W.A.T. and feels a tad less artificial while sharing many of its faults, which happen to consist of the same troubled schematics. In the end, the emotional attachments we develop for its stars we feel have been used against us in an ending that does not inspire or make us feel like the time invested has been a standout experience.

The performances offered by Peña and Gyllenhaal are solid and the character development had the makings of a slowly seasoned recipe for success, but we cannot look past the quality of the raw ingredients used in the batch.