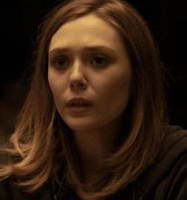 As we begin to look into their respected careers of teaching classes and putting advocates of the supernatural to public shame by exposing fraud aimed at the gullible, Tom eventually decides to bring on a new team member (and future love interest), “Sally Owen” (Elizabeth Olsen).

When it is announced that the world’s most popular psychic is coming out of retirement after 30+ years of inactivity following the death of a skeptical journalist, Buckley jumps at the chance to make his the team to bring down the biggest psychic of them all. Strangely, Matheson isn’t interested.

For reasons not immediately clear, Matheson seems to be afraid of Silver. When it does get moving and the investigation trail takes an unforeseen detour with odd occurrences and tragedy, the assignment begins to prove much tougher than any case handled thus far.

Yes, we get the expected anti-atheist bias of Hollywood, but I enjoyed Red Lights all the same. What makes the film such an interesting one is that it provides audiences a look at the technical aspects of professional debunking. We hear not only their jargon, but we watch them work. We go with them. We get their approach to take when on the hunt for frauds.

And amidst talk of proper test parameters, the mechanics of their MO are the biggest factors in how we are catapulted into the story. Matheson’s cold demeanor and ruthlessly level head seem to be a giveaway of what is to come, but as with mediums and spiritualists, things are not what they seem. My gripes with this film are not on where it goes – which will be a deceptively well pulled-off surprise – but the way it gets there.

Writer/director Rodrigo “Buried” Cortés knows how to misdirect his audience and does so with a certain level of finesse. It is the scares that prove less than tenable, scares that are flighty and more often than not, schematically out of place. Were it not for Cillian’s cutting performance, we’d be bothered by this all the more. Some logically challenged story components put in to try and make things more cryptic fail or else are accompanied by little bits that needed to be better explained or eliminated (preferably the latter).

But as usual, Weaver can stroll right in, and with the likes of Murphy and “Dr. Paul Shackleton” (Toby Jones), do a bang-up job at portraying a scientist who is even smarter than she sounds, albeit with a pain-stricken past. And that is my single biggest gripe with the film.

I’ve pointed out before that Hollywood woo-woo artists love to portray skeptics as dispiriting and lifeless deadpans, trying desperately to hide painful pasts and dark secrets. It’s like the skeptics “know” there is more out there, but won’t let that conviction out except in their weaker moments—and so says Weaver’s character in almost so many words about halfway in: “We’re weak, Tom! We wanna be strong, but we’re not!” So Hollywood’s heavily relied-upon concept of a skeptic as a calloused, prideful know-it-all who has a lot to learn is alive and well here.

In the name of entertainment, however, I am willing to forgive much of this, especially in light of the incredible ending, but this still doesn’t make right the wrong assumption. It is the skeptics who have rendered most believers not even willing to compete in open debate, and it’s been this way for ages. If one wants to see how someone like John Edwards answers skeptics, they need only watch his videos or read this.

The hurdle here is that no one is able to take this remarkably tension-building story, which reaches its peak in due time, and make it into what it could (and should) have been. The strong undertow of melodrama - especially on the part of De Niro who comes off more like a determined actor in a play of Hamlet – calls for additional point deductions.

It’s far from flawless, but like it or not, Red Lights is an example of a director knowing how to bedazzle his audience. The entertainment value alone makes this one worth considering.