There was simply no need to dive back into the Bourne series to add another sequel, but that’s what director Tony Gilroy decided to do anyway in The Bourne Legacy, this time with a new hero in focus. The Bourne series with Matt Damon burst onto the scene and left us with three A-quality films, and now we have this film - a barely B-quality film - following in their hard-to-fill shoes. Well, at least Gilroy decided to bring with him a talented cast.

In this segment, Jason Bourne is not in the crosshairs, but in the background. He makes no personal appearances in the film. But while he’s off the radar elsewhere in the world (while things are still hot from the Treadstone controversy that began in the first film), “Aaron Cross” (Jeremy Renner) is training with a team of fellow elites in brutally cold Alaska and he’s breaking record times. 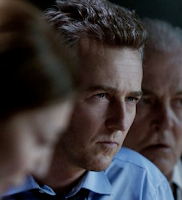 As a member of Operation Outcome, we are brought into the now-compromised world of Blackbriar and the Treadstone Project with the CIA’s “Eric Byer” (Edward Norton) who has decided to shut things down due to the leak caused by Bourne’s defection. This widens the film’s net to focus, not just on Cross with Bourne in the background, but the risk of having other potentially wayward elite fighters get out of control.

As the media is getting dangerously close to discovering the truth behind these operations, the Department of Defense is getting more and more nervous. So when the government tries to off these soldiers and just about everyone else who knows about the projects, it is then that Cross flies into action. 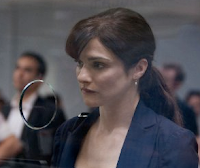 Cross runs into “Dr. Marta Shearing” (Rachel Weisz), one of the scientists responsible for the genetic, virus-based enhancements. Having both become targets, they must flee to Manila, Philippines where Cross seeks an injection that will allow him to preserve his enhanced mental acuity to complete his already permanent physical enhancements.

Both Cross and Bourne have gone through the same training, but this film goes into great detail on the genetic enhancement aspect of things. It goes into so much detail that this, along with constant and annoying screenshots, oddly chosen camera angles, and abrupt scene changes take us across the world in the first 30 minutes of the film and it’s a hiccup-y ride. And whereas the first three Bourne films knew how to congeal a story down to its most relevant parts, we find that we’ll just have to live without that luxury in Gilroy’s film.

But once things get moving, we find that the story is thick enough to keep us more than interested. My problem was that we got to see rather little of the record-time ass-kickings we saw in the other movies, though there is some of that. But when we did see them, less care was taken to ensure that they appear as graceful as they do fast. Some “shaky camera syndrome” is noticeable, but not a huge issue.

Leading up to any action, Cross works as smoothly as possible to “talk” his way out of any conflict. There is realism in that, which seems to give the film an admirable tension credibility. But when words don’t work, (and we’re glad they don’t), Cross reminds us that he’s a badass like Bourne.

Speaking of Bourne vs. Cross, we never see that, but are only left to wonder who would have the edge. Renner does a fine job in this film, but he – along with everyone else – is bested by far by Weisz who gives a no-joke Oscar-worthy performance as the only survivor of a workplace shooting. Her emotionally charged state of shock is so amazingly well portrayed that it is scary. There are no problem performances here, but hers far exceeds anyone else’s efforts. The dialog and developments between Cross’ and Dr. Shearing’s meet-up could perhaps have used some padding, but the chemistry between the two is nothing short of remarkable on screen. 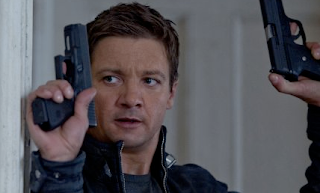 Cross’ enemy, “Larx-03” (Louis Ozawa Changchien) is where we finally succumb to “how many more damn black bag operations are we going to have to find out about???” syndrome. Cross’ mortal enemy must be another super-soldier, but the way the film wraps things up in a final showdown leaves a little to be desired, making The Bourne Legacy a fairly well laid out story, but a movie that will only hit the high marks when our expectations are not too terribly high.