Regrettably, another Adam Sandler movie is upon us in That’s My Boy, a dirty, shameless, perfectly raunchy comedy that has him screwing 80-year-old ladies and expecting us to like it.

And along for the ride with him this time is Andy Samberg who plays his son. And yes, he gets pulled under, too, despite making us say: “Hey, he really looks like he could be Sandler’s son!” At least they got something right.

We meet Sandler’s “Donny Berger” in the 1980s as a child (Justin Weaver) where in 7th grade, he is taken advantage of by a sexual predator teacher named “Mrs. McGarricle” (Eva Amurri Martino) resulting in his becoming a father at a very early age. More than that, rather than being repulsed at what happened, Donny becomes a tabloid sensation, rocketing him to the league of Corey Feldman, and later, Vanilla Ice. Everyone, including most adults, love this act of sexual abuse by a teacher and high-five each other over how cool it is (but it's not like we take any story signed off on by Sandler seriously, anyways).

But before we know it, Donny is grown up, having become (as we knew would happen) a has-been—broke and owning the IRS tons of money. He’s also an alcoholic and a rotten father (big surprise!), which is why his son and product of the statutory rape has distanced himself from him and made a life of his own. 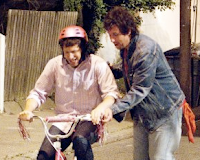 Memories of dad under the name “Han Solo Berger” were too painful, causing “Todd” (Samberg) to rename himself and start the new life as a smart-but-withdrawn-and-socially-troubled numbers whiz with a beautiful girlfriend (Leighton Meester) and her father (Tony Orlando) with whom he is getting ready for a partnership. Things are looking up—until Donny breaks back into the picture uninvited to hopefully collect money on a prison reunion film between himself, his son, and Mom.

And that doesn’t begin to express the gritty, filthy details that are all wrapped up in a plot with lots of star power to go with the unexpectedly outrageous. But That’s My Boy is, believe it or not, a step up when compared with the last few Sandler flicks. 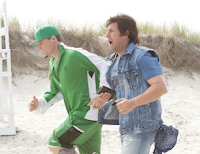 The way I figure, somewhere down the line recently, Sandler got a clue that he’s been sucking like a Hoover and decided that his usual “old, cantankerous, annoying Jew” routines where he acts socially clueless and speaks in a funny voice weren’t enough. So he decided it was time to drop the silly slapstick and lame, intelligence-insulting gags and turn the dial to the left on the shock value to make up for it.

Yep, this had to be what happened. Sandler figures he’ll just shock us with sexually perverted stuff that would make Howard Stern hide in the bushes and we’ll just laugh at the craziness of it all. In Sandler’s and director Sean Anders’ world, incest and sex with granny and the usual “constantly wasted” comedy must seem like the easiest recipe for funny. And it nearly was here with the likes of Susan Sarandon and James Caan to help out, together with SNL’s Will Forte and Rachel Dratch in for the ride. Yes, it nearly worked (if in a pathetic sort of way).

Among a great many films today fighting for an audience despite grievous shortcomings, this one throws in 80s nostalgia (something else for the target audience to sigh over and reflect on while letting slide the lack of real, clever humor). So it isn’t a success, but as stated, this is a +1 among Sandler’s recent ventures. And lo and behold, we do laugh a few good times.

Regardless of why, this is more of a guilty pleasure than a movie looking to earn its stripes, and if you dig Adam Sandler films, you ought to treat it as such.