2012 has not been a good year for comic book movies thus far. I was really not happy giving The Amazing Spider-man the super-low grade it got. And now comes The Dark Knight Rises. In it, director Nolan gives it his all, but his all is too much. The Dark Knight doesn’t really rise at all, at least not without a cane for much of the time. But it doesn’t fall, either.

We start eight years after the death of D.A. Harvey “Two-Face” Dent following events in The Dark Knight (2008) wherein war was declared on rampant organized crime with the enforcement of the Dent Act. Still bearing the guilt for the death of Dent in the public eye, new circumstances arise that will bring Batman back into the spotlight.

With Wayne Enterprises struggling and Batman retired and coping with poor health, a new terrorist force led by one we only know as “Bane” (Tom Hardy) comes out of the woodwork, following in the footsteps of The League of Shadows. His aim is to finish their work. If you have not seen Batman Begins (2005) and The Dark Knight, you will need to see them both before viewing this or you will be lost.

But some of us almost wish we could be lost rather than in the know on a story-laden movie of such highly excessive length as this one. Bringing us up to speed on what has happened in Gotham in Batman’s absence doesn’t take long. Or it shouldn’t, but it somehow does. The best pacing in the world doesn’t stop The Dark Knight Rises from feeling like a laboriously-told story, one that trembles and shakes for lack of structure. 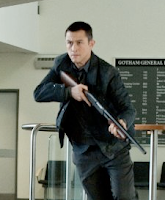 It is a common problem for comic book movies to have so much happening that we have the characters fighting for screen time. It happened with the third Spider-man and a little in The Dark Knight, but here, it is a real problem with Joseph Gordon-Levitt as “Blake” and Gary Oldman as “Commissioner Gordon,” not to forget Morgan Freeman as “Fox” and Marion Cotillard as “Miranda.” They’re all fighting to contribute in their own ways to a story hurting for room.

Worse yet, this time around, Bale seems to lack the rough, understated eloquence that Batman must possess. When he is back in the swing as Batman, we are thinking about his changing his voice while in costume rather than much of what he is doing or trying to do. He sounds like “Rorschach” from 2009’s Watchman.

There are no Ledger-worthy performances here, but the familiar and inviting “Alfred” (Michael Caine) is the only impressive thing about this movie. His performance is more personally owned than any other. Even a close second, Neeson (who only makes appearances in flashbacks and whose charisma in image alone speaks well for itself), can’t quite keep up.

Couched tightly in its huge budget, there are plenty of chases and city-destroying explosions and a city’s police force entirely crippled by a despot with bombs. There is some hand-to-hand combat between Bane and Batman and his unlikely cat burglar sidekick “Selina” (Anne Hathaway, an undeniably graceful addition), but there is no fascination—you know, the kind that comes with character-building and introducing new characters in a way that generates anticipation and respect? Nada. Not here.

This doesn’t feel much like a Batman movie. Even the clever use of contraptions is mostly missing. Of course, Batman shouldn’t feel like James Bond, but we would welcome anything to take our minds off of this narrow path of a movie that is just about totally void of surprises. That’s what we don’t want to see in our Batman. Batman should surprise us. But there is no superhero’s awe to be found anywhere here—and never should that be true of Batman even for a second! 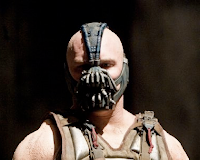 Batman’s fiercesome opponent is a bizarre, almost always shirtless, and ripped-as-hell muscleman with a funny mask on that he has to have to breathe, apparently. It would be nice if we could have that explained or just for a moment be able to relate to this character, but watching him and listening to him speak makes us feel like we’re watching a wrestler calling out challenges to his new rival. “Guys, why are you watching this? This is so fake and silly.” That’s what mom would say when we tried to watch Summer Slam 1990. Question: Why is THAT memory coming up when I’m watching Batman?? 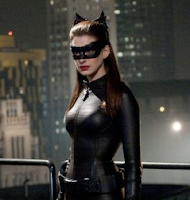 And not even a single attempt at lightheartedness is ever made, making this both a humorless and busy production by someone who should have known better, but acted like he only knew how to appease the frayed attention spans of ADD kids. The stretching improbabilities and loads of large-scale violence reduce this to a wanting movie about a dictator with a mask on who creates terrorism by giving back “power to the people.” It’s not only hard to believe, but a pointless ambition for a villain...except in movies where things so easily get so out of control that kangaroo courts of injustice are set up in the streets, just waiting for the hero to come and set things right!

Gotham City may look a bit different from the cathedral-styled halls in the comic books, but it’s still a breeding ground for soon-to-be-villains, and indeed, it must be. Pity we don’t ever start to feel for its citizens as anything other than props. There is no love here, no exhilaration, not much rooting for the good guys or bad, little besides watching huddling masses urgently escape one dire predicament after another.

Because the plot is so often buckling violently under its own weight in trying to tell too many stories, we have no time to appreciate much outside of the despair. We finally get to know the value of a hero, but when it comes at us, the movie is over and we are unprepared for it because of the way in which it was delivered. But the summer hype might have the more simpleminded movie buffs thinking they are enjoying this. And maybe they will enjoy it.