The director of Alien (1979) (Ridley Scott) brings us Prometheus, an indirect prequel to the Alien movies, and with the same dark and unwelcome feel of “fish-out-of-water” humans getting into more than they can handle on a far-away world. But Prometheus is not just an Alien prequel. It jumps in and around everything we found familiar and liked in Alien, but never gets back into it (or gives us much to like in its new semi-reincarnation).

Scott also wanted to tread new ground by making this one into a thesis on the merits of belief in the supernatural, and that’s about the only thing accomplished here. More on that later.

We start with two excavators who find the earliest in a series of cave paintings suggesting visitors from other worlds. This leads to a launched space mission to head to the only matching star system with a moon of a planet capable of sustaining life. The ship is called Prometheus. The mission is birthed by “Peter Wayland” (Guy Pearce), an ambitious believer in these paintings as evidence of an invitation for a visit. 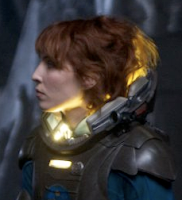 Wayland may be the result of a bad job by the makeup department to look like an old man, but he is an obviously determined explorer, and we know what happens when explorers get too determined in the movies, don't we? He is also wealthy and powerful. Just not wealthy enough to not need the funding from “Meredith Vickers” (Charlize Theron) who forks over more than a trillion dollars from the organization she represents to make the trip possible. You can feel the conflict of interest between parties looming from this setup alone.

When the movie gets rolling, the crew awakes from an over-two-year suspended animation trip and they are briefed as to their mission and focus. A skeptical crew prepares themselves for exploration of the new world, and none of them seem excited—none except two. “Charlie Holloway” (Logan Marshal-Green) and his girlfriend “Elizabeth Shaw” (Noomi Repace) who were (rather oddly) the same excavators who made the last find at the film’s opening.

One need only view the trailers to predict most of where this part-and-parcel sci-fi splurge is going. The aliens aren’t friendly, but worse, any humans with dreams of finding the answers to life’s difficult and ultimate questions will be dashed to pieces. Boohoo. But this is quite easy to deal with when you have such stunningly underwhelming character building like you have here. 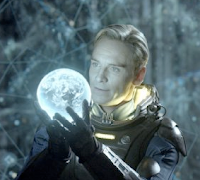 Shaw and Holloway are longing for answers, as is Wayland. Wayland’s servant robot “David” (Michael Fassbender) is the outside-looking-in party who, unlike everyone else, has no longing or drive for anything because he has no feelings. He’s a robot (and so much like “Bishop” in Alien that his presence is sort of curious to say the least). Vickers is the “materialistic bitch,” and she is after potential profit. Now put them all together and flush their personality distinctions down the toilet because that’s just about what the film does.

These don’t at all feel or look like people trained for space exploration. No one seems excited at discovering foreign alien DNA, or carefully constructed caves, or naturally built life-support systems. And dead alien soldiers in suits? Nah, no need to get excited! No one seems to connect with anyone very well. No one reads body language or even resonates like they are standing in the same room with one another. Even the ship’s captain “Janek” (Idris Elba) is the only one to make his personality rise above any of the others with the possible exception of Rapace.

Though impressive in what it intended to do in dealing with the origins of human life on earth, the film’s sci-fi is implausible at best and forced at worst—and this when it doesn’t show signs of immense sloppiness. There is one scene where an alien implantation is removed from Shaw’s body via automated medical computer and it seems like using one of those self-scanners at Walmart for quicker checkout. Nothing is in order; there don’t appear to be any serious safety or decontamination protocols or first-contact directives for finding and interacting with alien life in the year 2093, and no one seems to be in command on away-teams.


And it gets worse still. Ancient alien machines on a foreign world seem to still work fine after at least a few millennia later. When Holloway and Shaw are having some alone time, they spend moments contemplating a DNA sequence which they are looking at on an ipad-sized screen. I thought only Mission to Mars (2000) made the mistake of thinking human eyes could quickly scan billions of DNA sequences and make sense of them in just a few seconds!

The pacing borders on a miserably uneventful and slow crawl forward, and while the suspense is laid on thick enough to propel the movie forward to a gradual increase in appeal, our desire to see a finality is only met with feelings of want coming out the other side. The elements of the story don’t so much suffer, as does the movie itself from not having much of an idea to begin with. And we get practically nothing that takes us back to what we remember from Alien, at least not enough to chew on. And there are no Xenomorphs! 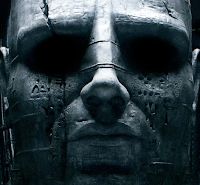 A few events mirror what we got in Alien, but with none of the originality. We get augmentations of an older great movie made into a digitalized and bastardized tease. But it’s a needless expansion – the details of which not only don’t always clearly connect with what we could conceive as laying something of a foundation for the first film – but too many details detract from the mystery of origins we had going in. We wanted that mystery!

The sadder part is that the film’s belief vs. non-belief examination is lost in a movie that threatens to kill its effect (and just about any other positive effect on the viewer). This is little more than an expensive flop. I expected way better from Ridley Scott.

Oh yeah…and speaking of the debate on the merits of belief in the supernatural, I'll make only this declaration: Finding any extraterrestrial life on distant worlds should DESTROY faith in any deity instantly, much more so when the aliens are hostile and hellish! End of debate.