Sometimes the hype from expecting a bad movie’s sequel to be even worse gets to be too much for some critics. In those extreme cases, critics tend to just follow suit with the rest of the bashing - and especially in cases like these where we have throw-away characters, a surplus of gore, and “easy girl” full nudity - it’s not hard to dub what we are watching pure trash and be done with it.

Let’s wait a second. That’s just too easy. Piranha 3DD is the next in line after Piranha (2010) and offers some of the best (of the worst) of what bargain barrel entertainment has to offer—and dare I say, a few surprises here and there. 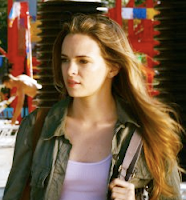 It is a year after the first piranha attack on Lake Victoria. The thought-to-be-extinct prehistoric super-piranhas have made it a ways away, this time to Cross Lake in Arizona. As the story (almost cleverly) explains, this is due to sulphur dioxide used in artificially recycled water, which confuses the fish into hunting their prey in man-made bodies of water instead of preferred lakes and rivers. The way it’s pitched, it sounds credible.

When Maddy and “Kyle” (Chris Zylka) and “Barry” (Matt Bush) and “Shelby” (Katrina Bowden) discover that the local river where the waterpark is getting its water from is infested with these razor-toothed killers, the issue becomes getting Chet to believe them in time. It honestly takes some work to picture Koechner as the antagonist, but it’s not like we really care.

Pretty much the entire film takes place the day before the park opens, so within one day, the kids must find and correct the problem while shamelessly making room for another sequel (more on that before we conclude).

“Deputy Fallon” (Ving Rhames) returns from the first film missing limbs. An always impressive Rhames adds to this wanton work in some very needed ways (if anybody here does). But no other celebrity cameo does a thing to help except for David Hasselhoff who plays a frustrated version of himself having hit rock-bottom. You might assume I’d be inclined to say that he, Rhames, and Lloyd are about the only things this film has going for it, but that wouldn’t be entirely true.

Despite what you’ve heard, Piranha 3DD is not un-watchable, not totally. It’s just intentionally stupid (and gets stupider) and is proud of being dirty and smutty, picking apart everything in run-of-the-mill horror movies as you’ve come to expect and giving us more of the same.

While it is especially repulsive and graphic, it is artistically grotesque at the same time. It has this way of taking gore and spreading it out so that the director, writers, and producers all come off looking like certifiable sickos. I’m fine with that!

And Piranha 3DD did one thing well in knowing how to strike a very mild level of fear in viewers. Before it blows its efforts all to hell, there was something done right in giving us horror comedy that at least to some small degree made us want the characters to get out of the water in time. And I definitely wasn’t bored.

Christopher Lloyd, as “Mr. Goodman” with his scientific knowledge, is again counted on to move the plot along. And though like many characters in the film that do not have very big parts, his is another reason this idiocy looks like such a substance-less hack-job hoping to get by on celebrity stand-ins (although despite appearances, we really needed him).

But let’s give credit where credit is due; while it is very often predictable, there are a few surprises in this mess, and some of them are indeed funny, just as a few lines are funny here and there. In fact, this is arguably a better film than the first one. 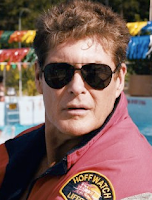 It was almost worth the making, but ultimately, it takes some level of skill to make this stuff work, which this film doesn’t quite exhibit. The credits are very long because they have the cast doing blooper out-takes and Hasselhoff posing and acting dramatic, which means they knew they never had much of a movie in this. But if you’re in the right mood for it, it may not fail as bad as you’ve been told to count on it failing.

Let’s hope there will be no sequel, but in the one-day space of most of the movie, we learn that the fish are evolving to walk on land—mind you, they didn’t know this that morning or that afternoon, but at the movie’s conclusion. That’s when they discover the fish evolving to walk on land! That’s some fast evolution! So you see, only intentional stupidity could reach this level. It is what it is.