Brave is about young “Princess Merida” (Kelly Macdonald, voice) who defies the custom in her old-world Scottish kingdom by refusing an arranged marriage, preferring instead to live a care-free life of archery and riding through the forest without a commitment in the world. Her prodigious handling of a bow and arrow and her love for riding off into sunsets will rival her love for anything (or anyone) else.

When the incessant pressures of her mother (Emma Thompson, voice) to grow up and become what is expected of a lady and princess get to be too much to handle, she heads out on her own in the woods and finds a witch (Julia Walters, voice) who offers her a chance to change her destiny.

But when embracing a changed destiny proves to be something much darker and altogether more sinister than she’d hoped, she finds herself and her family in crisis where her skills and insight can make or break an outcome for the better.

Brave is Disney Pixar Animation Studios’ 13th major animated production, but unlike Finding Nemo, Wall-E or Up, this one will have a much more difficult time in finding and holding its intended audience. In fact, it remains unclear who the prime audience demographic was to be, though the film seems to have been made with younger as opposed to older viewers in mind. 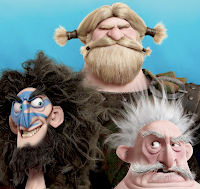 The story, just like the dopy humor and crudeness to go with, will make for a plenty difficult time relating to youngsters looking for the more time-honored guideposts in animated entertainment – such as, you know, ALL KIDS! – who naturally prefer simpler stories with identifiable morals and stimulation achieved by way of impression-making good guys and bad guys and larger-than-life plot-twists. We have none of that here. This just isn’t memorable. It is mostly just cheap stimulation.

But Brave isn’t the only animated film in recent years to have gone the way of fast and chock-full of disorganized (and needless) content, as opposed to instructional and meaningful with a bend towards fun. This is the type of film that just accepts that modern kids can’t slow down, but have to be visually titillated at every moment by something happening, although there are far worse offenders than this in that regard.

Brave has some of the qualities of a child’s movie and includes what adults would find amusing, but what it offers to each is not substantial enough to make it worthwhile. It takes an awfully long time for the story to move into anything even remotely worth watching, and even then, the plot just isn’t epic enough to stand on level ground with other great works we’ve come to know. 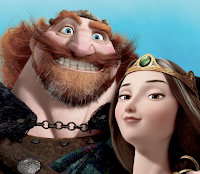 This movie had tons of potential and has perhaps the best voice-work (and voice cast) in recent years—all depressingly foiled by a plot that falls short of grand (and sometimes even interesting). The humor – with witches and their potion answering machines and other silliness might entertain grandparents before it would parents – will not appeal to most youngsters, not enough to keep them watching, anyway. At that, it is mostly just a distraction.

From what? Well, from the tale of a selfish girl who wants something more out of life, but comes to realize the best things are at home and are called family. Way to go for containing something that ties into family values in some way. But this largely uninspired work borrows a tad from Beauty and the Beast and ever more loosely from every single movie with a witch in it for the last sixty years, but without giving us the slightest hint of a budding “tall, dark, and handsome” romance.

When it is not being outright crude in trying to be funny, it ignores its own symbolism and fails to follow up on the devices and subtle plot-points that could have made it into something better. For example, there is a scene in which an angry Elinor throws Merida’s bow into the fire, causing the wayward princess to run off in a tantrum. How nice it would have been to have mom at some point surprise her with it at a later time, but instead, the movie just forgets about it and runs along in its own tantrum with Merida having her bow at various times when she needs it later on.

The story suffers in more than a few ways – always from its own shortcomings in the scope of the writing – leaving us with a movie that isn’t a total failure (and is even emotionally touching at just a few places), but one that misses the super-high bar set in years past for truly great animated entertainment. This will not be joining the greats, which is a shame, since Merida has the making of one of the most outstanding animated characters with the charm to win a whole new generation.